Song of the Week: In the Bleak Midwinter

Song of the Week: I Heard The Bells on Christmas Day

Merry Christmas to all and to all a good night!

Destiny and Power by Jon Meacham 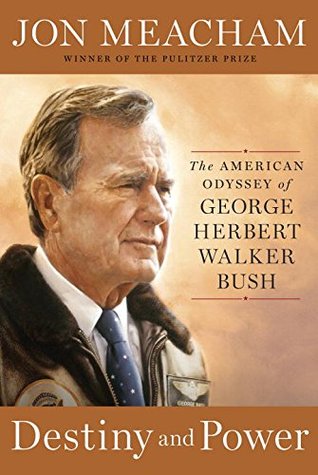 Jon Meacham has written a truly wonderful biography of the 41st president, George Herbert Walker Bush. Drawing from nearly nine years of interviews with the President himself, interviews with friends and family, various memoirs, and Bush's own diary, this book is a biographical portrait of the man in full.

Meacham has a real knack for storytelling, knowing when to dive into an area and when to give a brief summary and move on. There's more in this book about Bush's time in China and as CIA Director than I've come across elsewhere. His vice presidency doesn't get much time, though. You're given Bush's philosophy of how a VP should act and that's about it. One interesting bit, though, is most of Reagan's second term is viewed through the lens of how it affects Bush's run in 1988. In all my reading about the 1980's, I've never seen this perspective.

Bush's one term as president was defined mostly by global events (the fall of the Berlin Wall, the collapse of the Soviet Union, German unification, the Gulf War, etc.), and that takes up the bulk of the book's chapters on his presidency. There is talk about some of his domestic agenda and frequent quotes from Bush's diary confiding his worries about the economy, but it's a secondary subject.

Bush's compassion and capacity for friendship are legendary and come through in the book. He may not have been inspirational as Reagan or have the rock star charisma of Clinton, but he forged personal, long-lasting connections with many he encountered.

A remarkable book about a remarkable life.
Posted by StephenD at 1:48 PM No comments:

Song of the Week: Christmas Is

What is Christmas is to you? Here is Lou Rawls's answer.

This week's song is a classic Motown tune from Darlene Love.

Song of the Week: White Christmas

It's that time of year again. The time when children's thoughts turn to sugar plums and presents and when the Song of the Week turns to Christmas music.

We open this year's season with a release of Eric Clapton's new album Happy Xmas.

Posted by StephenD at 8:09 AM No comments: