The Gatekeepers by, Chris Whipple

The Gatekeepers is a fascinating inside baseball account of the Presidential administrations going back to Richard Nixon. You learn a lot about the inner workings of the White House and how major policy things were done. With all the quotes from the principals and some background staffers, Chris Whipple must have spent hundreds of hours in interviews. In some places it's a bit surface and his political biases show through, but overall it's well written and engaging.

Recommended for political junkies of any stripe.
Posted by StephenD at 10:13 AM No comments:

Song of the Week: Build for Comfort

Song of the Week: Bernadette

This song has been in my head for a couple days. I thought I'd share.

Posted by StephenD at 8:50 AM No comments:

Song of the Week: Hey! Baby

This week's song comes from Jimmie Vaughan's latest album - Live At C'Boy's. It's a trio album featuring Jimmie on guitar and vocals, Mike Flanigin on the Hammond B-3 organ, and the late Barry "Frosty" Smith on drums. 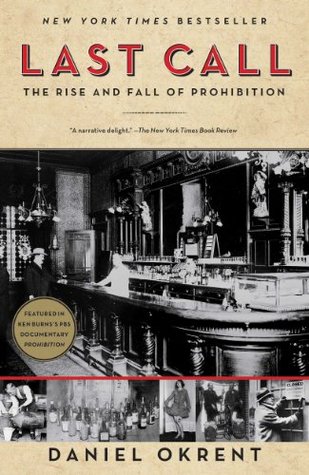 Last Call:  The Rise and Fall of Prohibition is a large, sprawling book that inspired a Ken Burns documentary and the American Spirits Smithsonian exhibit that I got to see while in Pittsburgh last week. The book is full of lots of interesting historical tidbits. I marvel at ingenuity of some of the ways people skirted the laws.

The temperance movement grew out of some very real concerns. During the 1800s, American consumption of alcohol grew faster than the population grew. Many Americans were literally drinking themselves to death and religious and other groups wanted to take steps to curb the use of alcohol. In this regard, Prohibition did its job. In the first few years of Prohibition, alcohol consumption dropped 70% and didn't reach pre-Prohibition levels until 1973 (and dropped again in the 1980's). But in every other aspect, Prohibition was a failure.

Rather than dwell on the aspects most of us know about (the open disdain for the rule of law, the rise of organized crime), I'd like to mention some of the other points author Daniel Okrent makes. The push for Prohibition and the 18th Amendment drastically changed politics in America. For the first time, many different groups worked together because they agreed on one issue:  they were dry. Aside from the ultra religious, the other main group in support of Prohibition was women. But as they lacked the right to vote, their power to make change was severely limited. That's why many people banded together to promote women's suffrage. They reasoned that if women had the right to vote, Prohibition would soon follow.

Another reason Prohibition took a while to gain traction was the taxes collected on alcohol. From the early days of the republic (first instituted by Alexander Hamilton) to the Civil War to the Spanish-American War, the government would raise the liquor tax to pay for the war, ,then lower it when the war was over. If alcohol was made illegal, a great source of income would be removed. But after the 16th Amendment created the income tax, another domino fell.

You can conceivably trace women's suffrage, the income tax, single-issue voting, and rallying of minority groups toward a cause to the temperance movement. Okrent fairly presents these items and the issue of wet vs dry without taking sides. His narrative is politically balanced except for his unbridled disdain for Calvin Coolidge.

Overall, it is a great and interesting book on a turbulent time in American history
Posted by StephenD at 7:53 AM No comments:

This week's song is from Traffic.