Song of the Week: Breath

Song of the Week: Breathe

"Sixteenth of June 9:05, doorbell rings.."  I missed June 16th last week, but I'll use the song this week instead.

Email ThisBlogThis!Share to TwitterShare to FacebookShare to Pinterest
Labels: music, song of the week, U2

Song of the Week: Strut

I'm happy because of last night's Penguins Cup win, so here's a happy song from Kenny Wayne Shepherd's 2011 release How I Go. 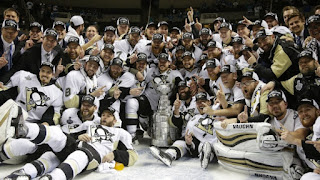 Woo Hoo!  The Penguins have won this year's Stanley Cup!

I'm typically not one to blame the coaches for failure, but it was obvious that Mike Johnston wasn't a fit for this team. The move to replace him with Mike Sullivan and trade for guys like Trevor Daley and Carl Hagelin was probably what turned this year around. In 12th place in the league and out of the playoffs at Christmas, the Penguins were the best team in the league in the second half of the season.  Crosby came alive and Letang started scoring like he can, but it was a full effort by everyone on the team that made this team as good as it was.

The Rangers tried to beat them with hitting, but the Penguins skated circles around them and chased Henrik Lundquist before the halfway point of two games.

The Capitals tried to out-skill Pittsburgh, but they proved no match to Pittsburgh's resiliency.

The Lightning tried to match speed with speed and almost pulled it off, but came up short in a Game 7.

Last week, I watched the MST3K episode "Skydivers'. It's another Coleman Francis "classic". It's not quite as painful to watch as "Red Zone Cuba", but you can tell it was made by people who have no idea how to tell a story.

"I saw my hair in the mirror and I panicked."

Posted by StephenD at 9:02 AM No comments: