An Empty Hell by, Dave White 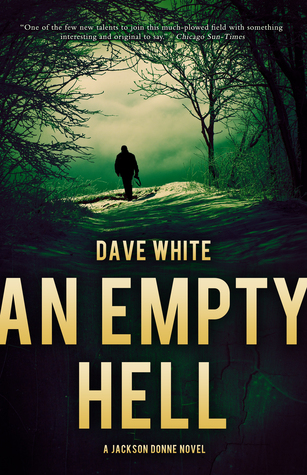 Just when I thought I was out they pull me back in. -Michael Corleone

I open my review of An Empty Hell with a quote from The Godfather, Part III instead of the first line of the book because it must have been what Donne was thinking.  A year after the events of Not Even Past, Jackson Donne has settled into a nice routine in Vermont; he does odd jobs for a local motel, he avoids attention, and he drinks lots of beer. Back in New Jersey, members of the narcotics task force Donne belonged to when he was still a cop start showing up dead. One of the few remaining former cops thinks Donne is behind the murders and, thinking he is next on the hit list, hires PI Matt Herrick to track down Donne. Herrick finds Donne and a whole lot more than he bargained for.

No matter what he does, Donne can't stop being haunted by his past  No matter what he does, whether it's the right thing or running away, he always ends up in pain or causing pain to those he holds dear. It's even evident in the action that wrecked his police career, which is told in flashback in the middle of the book.

Matt Herrick his haunted in his own way, too. In some ways he is a mirror image of Donne. He is a high school basketball coach who is a retired soldier. Like Donne, he is haunted by his past actions, but those actions ended up saving lives, instead of costing them. He also does the right thing, even when the right thing is quite often is the path of most resistance.

In many ways, An Empty Hell is Herrick's book, not Donne's. He gets more screen time (page time?) than Donne and is a very active character, while Donne is more reactive. The two are a good pair and, at times, I had visions of them becoming a Derek Strange/Terry Quinn private eye duo. But, since White likes to put his characters through the emotional wringer, that was not meant to be.

As always, Dave White knows his New Jersey. There are times you can almost smell the Taylor ham (or pork roll, if you prefer that term). And the novel's pace threatens to give you blisters as you turn the pages.

In terms of the series, I wouldn't recommend this book as the starting point because the events are tied very closely to what happened in Not Even Past. But every Donne book is worth your time.
Posted by StephenD at 9:06 AM