Song of the Week: Good Texan

I'm off to Texas this week for vacation. To get in the mood, this week's song is Stevie Ray Vaughan and his brother Jimmie singing "Good Texan" from the album Family Style released in September 1990, almost a month after Stevie's death.

Posted by StephenD at 7:04 AM No comments:

Posted by StephenD at 9:14 AM No comments:

Song of the Week: Superman Inside

Posted by StephenD at 8:50 AM No comments:

Song of the Week: Still Remains

Another one from Stone Temple Pilots.  I don't think this was ever one of their bigger hits, but it's always been one of my favorites.

"If you should die before me ask if you can bring a friend."

This Is Orson Welles 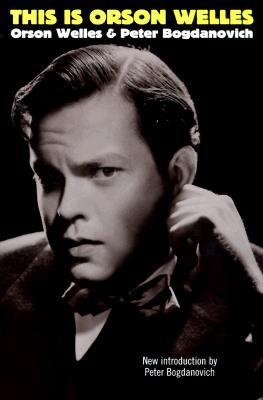 This Is Orson Welles is an edited series of interviews that director Peter Bogdanovich did with Welles in the 1960's and 1970's. The topics run the gamut from Welles's life and career (he considered the book his autobiography) to people he knew to his thoughts on all things art.  Even for someone as familiar with Welles's life and work as I am, there were some surprises in this book.

It is quite well known that when Orson arrived in Hollywood, his first picture was going to be an adaptation of Joseph Conrad's Heart of Darkness. Welles was to play Marlow and there were going to be long stretches of the film shot from the point of view of Marlow (a device that proved unsuccessful in Robert Montgomery's Lady in the Lake).  There was also talk of Welles doing a film version of the Bible with all the dialogue directly quoted from the Gospels.  But what I didn't know was that he tried to do a movie called Smiler With a Knife, co-starring Lucille Ball. The studio said "What do you want her for? She's practically washed up in pictures." Smiler was to be a total farce featuring the kind of gags Lucy made famous 15 years later on her television show.

There is a famous theory that Welles hated finishing his movies.  How else could you describe his running away to Rio during the editing of The Magnificent Ambersons, giving the studio the opportunity to tear the film apart?  I can't remember if Simon Callow explicitly said it in his bio The Road to Xanadu, but he definitely left the reader with that impression.  Bogdanovich point blank asks Welles about this and Welles shoots him down.

Welles also pontificates on the subject of all art being autobiographical.  I agree with him when he says that the work is the important thing, not the mind that created it.  He says, "It's an egocentric, romantic, nineteenth-century conception that the artist is more interesting and more important than his work... The emphasis on the artist himself - the glorification of the artist - is one of the bad turns civilization has taken in the last hundred years."

On actors:  "Everybody in the world is an actor. Conversation is acting.  Man as a social animal is an actor; everything we do is some sort of a performance."

The book is thought provoking, elucidating, and quite funny.  There are numerous times where you can just hear the smile in Orson's voice and see the twinkle in his eye as he answers Bogdanovich.  In the old game of "Name three famous people living or dead who you want at a dinner party", I've always included Welles and if you read this book, you will, too.

I'll close with an excerpt from Bogdanovich's introduction, an essay he calls "My Orson".

My favorite memories of him? Many:  like Orson moving hurriedly through my study in the afternoon on his way the the bedroom, anxious not to miss a second of his favorite TV rerun, The Dick Van Dyke Show....And, vividly: Orson under the trees at night on a Beverly Hills sidewalk lithely doing a little song-and-tap-dance routine from a musical he had written up in school at age thirteen.  There was a full moon, and Orson's face was beaming at us, looking remarkably like an out-to-please teenager, unburdened by legends, lies, mistakes, triumphs, or failures. the whole world still out there for him to conquer.

Posted by StephenD at 9:27 AM No comments:

Song of the Week: Andy Warhol

This song played in the background of a dream I had the other night.  I hadn't heard it in years.

Posted by StephenD at 8:25 AM No comments:

Stanley Kubrick is one of my favorite movie directors.  I've seen everything he directed, except for Fear and Desire.  Most people know that AI was a Kubrick film that Steven Spielberg finished.  But Kubrick left behind several more unrealized films, the most famous of which are his Holocaust movie and a biopic of Napoleon.

Movies.com shared this nice little documentary talking about how close some of these films came to being filmed.

Posted by StephenD at 9:45 AM No comments: