Posted by StephenD at 8:28 AM No comments:

The Godwulf Manuscript by, Robert B. Parker 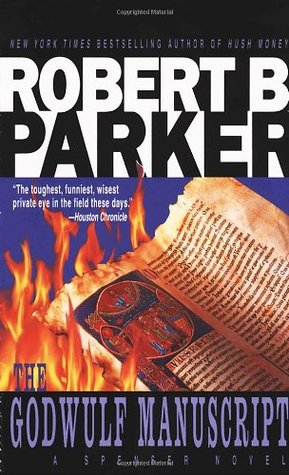 The office of the university president looked like the front parlor of a successful Victorian whorehouse.

Boston PI Spenser is hired by a university president to retrieve a priceless stolen manuscript. His first lead is a left-wing student group, whose secretary is a young woman named Terry Orchard. One night, Terry's boyfriend is murdered and she calls Spenser in a panic. Spenser now has two cases: the missing book and clearing the name of a young, frightened student.

The Godwulf Manuscript is the first Spenser book and it sets Parker up as the clear heir to the grandfathers of hardboiled detective fiction: Hammett, Chandler, and Macdonald. The twisted family dynamic of the Orchards fits squarely into Macdonald's wheelhouse. Terry is a child of privilege whose parents use her has a pawn in their mannered little war. Terry rejects their wealthy lifestyle and lives the Bohemian dream with her boyfriend.  Parker also lays on the Chandlerian similes and wisecracks pretty heavily. Upon meeting a suspect's wife, Spenser muses, "She was as lean and hard as a canoe paddle, and nearly as sexy."

Sometimes the wardrobe descriptions go on too long (but they're entertaining because they're the height of 1970's fashion) and Spenser seems to wisecrack just because it's what he's supposed to do. But the framework for one of the most popular and successful detective series in history is clearly there.

The Godwulf Manuscript is a fun and entertaining read. I've waited too long between Spenser books and will definitely read more.
Posted by StephenD at 10:13 AM No comments:

Song of the Week from A Hard Day's Night

A Hard Day's Night was released in July 1964, five months after their historic appearance on Ed Sullivan. This is the hardest decision to date. I love practically every song on this album and it would be cheating to call it a thirteen way tie.  Here is the track listing, just to give you an idea of what I'm up against:

Pretty tough, eh? This week's pick is the surprisingly downbeat last track "I'll Be Back". You can read a little bit about the song on its wiki page.

Posted by StephenD at 8:45 AM No comments:

I should have posted this last week. :)

Posted by StephenD at 8:57 AM No comments: 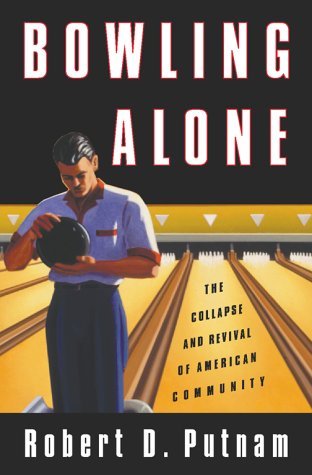 Americans are living lives increasingly isolated from each other, recent research finds. A quarter of Americans now report that they have not a single person to confide in with their most personal troubles, which is more than double the number reported twenty years ago. Overall, Americans report an average of two close confidants, down from three twenty years ago.

The definitive text on the phenomenon is Robert Putnam’s Bowling Alone, mentioned briefly in the above article. It’s a thick and dragging read on the concept of “social capital,” i.e. the social benefits we derive from interpersonal relationships. Putnam argues that our isolated lives have undercut America’s reserve of social capital, which in aggregate leads to much less pleasant lives (a neighborhood with poor social connections, for example, is not likely to form a Neighborhood Watch and keep crime down).

One would think that with our increasingly networked lives, via Facebook, IM, email, Twitter, and the like, people would be more connected than ever, but that seems not to be the case. A person can have 10,000 followers on Twitter, but no one to talk to when faced with a scary medical situation, for example. Our communications networks are vast, but our messages are trivial and at least one or two steps removed from actually sitting down and talking to someone face-to-face. How many of us email or IM our co-workers rather than walking over to his/her office?

There's a lot more Putnam says about the problems withering social capital cause, but one is struck by how isolated and less involved we are in our communities than our grandparents were.
Posted by StephenD at 3:28 PM No comments:

Song of the Week from With the Beatles

With the Beatles was released in November of 1963. It features the first solo composition by George Harrison in "Don't Bother Me". There are a lot of great songs on this one and the finalists are "Not A Second Time", "All I've Got to Do", and "Hold Me Tight".

Posted by StephenD at 8:39 AM No comments:

Song of the Week from Please Please Me

Please Please Me is the debut album of The Beatles, released in March of 1963. The first track, "I Saw Her Standing There", is a perfect example of the early Beatles style, and is a personal favorite of mine. This week's song comes down to "Ask Me Why" and "There's A Place". Both show the great musicianship and fun of the early Beatles, but the harmony between John and Paul give the edge to "There's A Place".

If you want to listen to the runner-up, here's "Ask Me Why".
Posted by StephenD at 9:30 AM No comments:

"We can rebuild this movie. We have the technology."
"Suspect is driving a white dot."

Posted by StephenD at 9:07 AM No comments:

In the Arena by, Richard Nixon 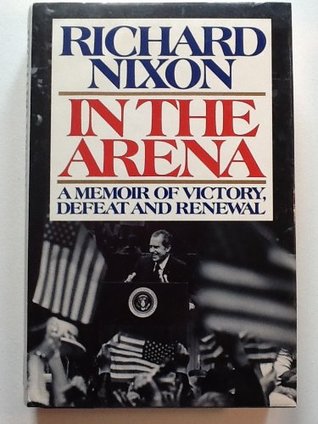 It is not the critic who counts; not the man who points out when the strong man stumbles, or where the doer of deeds could have done better. The credit belongs to the man who is actually in the arena... - Theodore Roosevelt

In the Arena was the eighth book written by Richard Nixon, published in 1990, and one of his most candid. The subtitle of the book is "A Memoir of Victory, Defeat, and Renewal" and Nixon opens with one example of each. For victory, the former President talks about his groundbreaking visit to China in 1972. For defeat, it is his resignation and self-imposed exile to California. His previous memoir, RN, ended with Nixon and Pat boarding the helicopter on the White House lawn, and the chapter on defeat picks up the night before, dealing conversations with his daughters, who wanted him to fight. He then talks about a sever bout of phlebitis, which sent him to the hospital for a surgery that almost killed him, and his years in the wilderness. For renewal, it was the writing of his memoirs and the television interviews with David Frost that helped him rediscover his purpose and decide what he wanted to do with the rest of his life.

Nixon critics who want to hear about Watergate shouldn't look here for answers (RN is better for that), as the President barely mentions the scandal. After the trio of chapters on victory, defeat, and renewal, the book is divided into five page mini-essays, each on a one word topic (e.g. faith, family, war, peace). He offers advice for politicians or anyone in a leadership role based on his years in office and things he learned from some of the big names of the 20th Century like Churchill, Eisenhower, and de Gaulle. The last chapter, "Twilight", is all about the importance of keeping active and mentally sharp as you age.

This is the third Nixon book I've read, and the man could write. He was also a very clear thinker and knew how best to communicate his ideas. It seems funny to say it about the only U.S. President to resign from office, but he writes at great lengths about duty and honor. If any politician lifts from his chapters on power, privacy, or governing, they'll have my vote.

In the Arena is a great read that I'd recommend to any student of American politics or history.
Posted by StephenD at 12:14 PM No comments:

Song of the Week: The Song We Were Singing

In case you've been living underground for the past couple weeks, you've no doubt seen the hype surrounding the 50th Anniversary of The Beatles' arrival on the Ed Sullivan Show, February 9, 1964. Even before the hype, I had it in my mind to celebrate this event by kicking off a series of related Song of the Week posts. For the next couple weeks, I'm going to be picking a favorite song off of each of their studio albums. The wrinkle is that, where possible, I'm going to pick from the lesser known songs, instead of their hits. Should be fun.

To kick this off, here's a song from Paul McCartney's Flaming Pie. He recorded this album in 1997 after the success of The Beatles Anthology release. "The Song We Were Singing" is Paul reminiscing about his Beatles days, how, for them, it was always about the music.