Song of the Week: We Three Kings

Great arrangement by Joshua Leavy. Listen to the best horn section in the buisness.

Song of the Week: Up on the Housetop

The Airmen of Note is the premier jazz ensemble of the United States Air Force. A few years ago, the group released a Christmas CD. Here's one of the tracks from that disc: "Up on the Housetop". Just listen to those screaming trumpets.

Posted by StephenD at 8:31 AM No comments:

Posted by StephenD at 9:22 AM No comments:

The Trinity Game by, Sean Chercover

Daniel Byrne didn't notice the boy with the gun until they were standing face-to-face, six feet from each other in the quiet alley behind the fruit stand.

Father Daniel Byrne works for the Office of the Devils Advocate - the Vatican's department for dealing with miracle claims. His latest case requires him to debunk American televangelist Tim Trinity, an obvious con man, who apparently has the gift of tongues. When his act is played backwards and slowed down, Trinity seems to be predicting future events with a 100% success rate. Daniel is perfect for the job. He's quick, efficient, and hasn't certified a miracle yet. Not to mention the fact that he's Tim Trinity's nephew.

The Trinity Game is a departure from Chercover's Ray Dudgeon series, with completely new characters and new locations. What's not new is Chercover's ability to spin a gripping yarn. The novel is expertly plotted and moves at a rapid pace.

Daniel Byrne is a strong protagonist whose actions are believeable. When it comes to these globe-hopping thrillers with an everyman thrown into the deep end, it's sometimes hard to believe that they can perform the stunts required of them. Chercover establishes early on that Byrne is a former Golden Gloves boxer. Throughout the book, Byrne struggles between his faith, his belief in the con man Trinity, and the woman he left behind at age 19 when he joined the priesthood. The Office of the Devil's Advocate is the perfect place for a priest in search of a miracle to affirm his faith.

Because the book's subject matter dealt with religion, I was on guard for backhanded swipes against organized religion and bad caricatures of believers, but the overall treatment of the subject was fair. I did have some problems here and there, including with how incapable a priest (Byrne) was in arguing for faith and how readily he was willing to throw his vows away. Toward the end of the book, Trinity declares "faith without works is dead" (quoting from the book of James) as if it's a new insight and he and Daniel decide that it doesn't matter which god you believe in as long as you do good works for your neighbor (a feel good, if theologically empty, point). There was also a global conspiracy angle between two shadow groups that felt like gliding the lily, but I'm sure that was there to set up future installments of the series.

Overall, The Trinity Game is a solid thriller.
Posted by StephenD at 9:14 AM No comments:

Song of the Week: It's a Marshmallow World

I first heard this song in college. My roommate and I laughed at the goofiness of the song, but you have to admit it's catchy. The first version I ever heard was Johnny Mathis's and, like last week's, this is my favorite version of the song. Nobody else captures the fun of the song like Mathis.

I watched this movie last weekend, so I thought it would be a good time to share it. This is a classic MST3K episode. The movie is extremely bad, but in a way that's goofy so it's easy to riff. Enjoy!

"Custume Designer?"
"He stopped 'em short."
They didn't use it but: "Lentils."

Prayers for Rain by, Dennis Lehane

The first time I met Karen Nichols, she struck me as the kind of woman who ironed her socks.

Prayers for Rain opens with Patrick Kensie being hired by Karen Nichols to deal with a stalker. After the events of Gone Baby Gone, Kensie no longer partners with Angie, but spends more time with his friend Bubba, the arms dealer. They deal with the stalker and everything seems right in the world until Kensie hears that Karen committed suicide by jumping naked from the observatory deck of the Custom House.  Plagued by a feeling that Karen didn't seem the type to kill herself, Kensie is determined to look into her death. He soon discovers that someone was playing mind games on Karen and most likely drove her to suicide. Who did this and why are part of a much bigger plot planned by the most devious villain Kensie has ever found himself up against.

Continuing some themes from GBG, Kensie has become tired of the private investigator scene. Some might read that Lehane was growing tired of private eyes as well, since this book from 1999 is the last time we see Kensie and Angie Gennaro until 2010's Moonlight Mile.  Along with the theme of weariness about the sickness in the world, I was reminded quite a few times of Ross Macdonald because a lot of family secrets come into play with the case.

While they are no longer a couple and no longer partners, Angie does play a big role in this book. Angie shows up on page 135 and Kensie asks her for a favor. Of course the favor only piques her curiosity, and soon, she and Kensie are working the case together.

I've gushed about how much I love Lehane's work before, and if you haven't read him yet, I don't know what your problem is. His language is as good as anyone working today and his characters are so layered and lifelike. Prayers for Rain isn't, in my eyes, as awesome as A Drink Before the War or Gone, Baby, Gone, but it's still better than most other books out there.

Recommended.
Posted by StephenD at 8:59 AM No comments:

Song of the Week: I've Got My Love to Keep Me Warm

This week, we've got Dean Martin singing "I've Got My Love to Keep Me Warm".  This is my favorite version of this song. 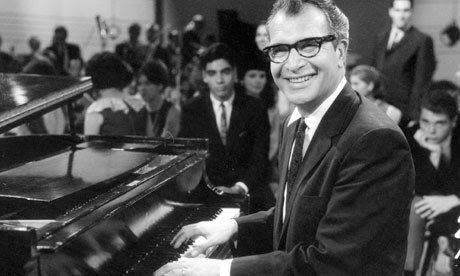 One year ago today, Dave Brubeck died at age 91. Among all the tributes to his life, many jazz stations across the country replayed some of his appearances on Marian McPartland's Piano Jazz. In one edition, from 1997, Brubeck tells a story about W.C. Handy.

Handy, for those of you unfamiliar with him, was a blues composer and musician often referred to as "The Father of the Blues". Perhaps is most famous composition is "St. Louis Blues". Almost every blues or jazz musician worth his salt has recorded at least one version of this tune.

On one of his many tours, Brubeck was going to play a show in Memphis, so he wanted to play "St. Louis Blues" the way Handy wrote it. Brubeck got his hands on the old music and was surprised to discover that it was written as a tango. So that night, he played it as a tango.  After listening to this interpretation, I can never not hear the tango elements of the song.

Here's the link to the episode.  The whole episode is great. If you don't want to listen to it all, fast forward to 46:30 to hear Brubeck tell this story. Fast forward to 48:40 to hear him play "St. Louis Blues" as a tango.
Posted by StephenD at 11:09 AM No comments:

Song of the Week: Christmas is Starting Now

That's right! It's time for the annual tradition of Christmas songs all December! This year, we start off with Big Bad Voodoo Daddy's "Christmas is Starting Now".

Posted by StephenD at 8:56 AM No comments: