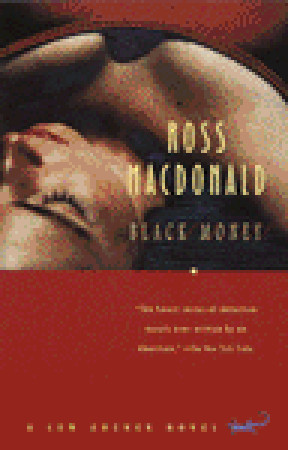 Lew Archer is hired by a rich young man to investigate a French nobleman who stole the man's fiance. Archer finds out the Frenchman is not entirely what he seems and discovers a surprising connection to a seven year old suicide.  Soon the lies and the bodies both start to pile up.

Going into an Archer novel, you kind of know what you're going to get: rich people with secrets they try to keep buried, not to mention some of the tightest similes in all of fiction.  Here's one such example:

"He lived in the adjoining harbor city, in a rather rundown tract whose one obvious advantage was a view of the ocean. The sun, heavy and red, was almost down on the horizon now. Its image floated like spilled fire on the water."

In addition to the usual family business, Black Money also involves a Las Vegas casino. It turns out one of our suspects might have been skimming from the mob.

I love a good Ross Macdonald. Even with a lot of the same elements in play, he always finds ways to surprise you. Of course you know the suicide was actually a murder, but I wasn't able to figure out who and why before Archer did.  That's the sign of a good mystery.
Posted by StephenD at 9:52 AM