Song of the Week: Witchcraft

A complement to last week's song. Which Sinatra song do I like better? Depends on the day.

Email ThisBlogThis!Share to TwitterShare to FacebookShare to Pinterest
Labels: music, Sinatra, song of the week

"This guy's just flaunting his bad driving now."
"It's a young Bill Clinton!"
"This is why there's no alcohol at Eruo Disney."

Song of the Week: Luck Be A Lady Tonight

I have a hard time deciding if this week's or next week's song of the week is my favorite Sinatra tune.

Posted by StephenD at 8:24 AM No comments:

Email ThisBlogThis!Share to TwitterShare to FacebookShare to Pinterest
Labels: music, Sinatra, song of the week 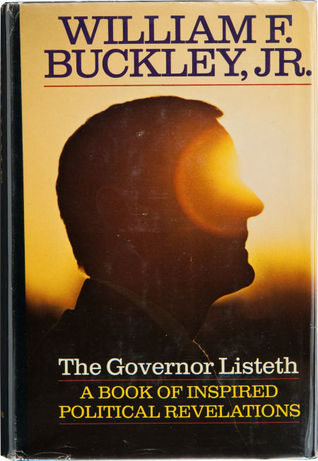 William F. Buckley Jr. was a gifted polemicist, best-selling novelist, sesquipedalian speaker, television star, political candidate, yachtsman, harpsichordist, wit, and bon vivant. He also had an abiding love for the paperback book.  When the paperback edition of any of his books was released, his publisher would send him a box full of them.  After his death in 2008, the folks at National Review began the task of cleaning out his office and his salon in NYC.  They found numerous unopened boxes of his books and eventually put many of them up for sale.

This is how I happened upon The Governor Listeth: A Book of Inspired Political Revelations, a big (nearly 500 pages) collection of WFB’s best columns, speeches, obituaries, and other writings from the late 1960s. Here we find Buckley near the height of his powers and in the form, I think, that suited him best. I have nothing against his longer books (Up From Liberalism, God and Man at Yale), but the short form of columns and speeches let Buckley swoop in and dive-bomb his subjects with his trademark wit. You can almost hear him smile as he twists the knife.

Is it worth reading a book of columns written in the 1960s? Yes and no. There are some sections, particularly those on Vietnam, that won't hold the modern reader's interest very long. But the collection opens with a speech on political violence, delivered in 1968 after the assassinations of both Martin Luther King, Jr and John F. Kennedy, but before the murder of Robert Kennedy, that is well worth reading. He says, "[M]ore significant by far than the ghastly executions of John Kennedy and Martin Luther King - acts committed by isolatable and isolated men - more significant by far is the spontaneous universal grief of a community which in fact considers it aggrieved. That is the salient datum in America: not that we bred the aberrant assassins of John Kennedy and Martin Luther King, but that we bred the widely shared and the most intensely felt sense of grief: such grief over the loss of Mr. Kennedy and Mr. King as is felt over the loss of one's own sons."

Buckley's reporting of the 1968 Republican and Democratic conventions are excellent examples of his reporting style.  Those sections were among my favorites in the book.

I received great joy from some of the non-political essays in this book. For example, his column on the Apollo 8 mission entitled "Can Men Make Miracles?" is near poetry. I've never sailed much outside of tooling around the bay on vacation, but "A Week Aboard Cyrano" makes me want to hop aboard a yacht and sail down to Bermuda.

The title of the book comes from the Bible (James, chapter 3):


In many things we offend all. If any man offend not in word, the same is a perfect man, and able also to bridle the whole body. Behold, we put bits in the horses' mouths, that they may obey us; and we turn about their whole body. Behold also the ships, which though they be so great, and are driven of fierce winds, yet are they turned about with a very small helm, whithersoever the governor listeth. Even so the tongue is a little member, and boasteth great things. Behold, how great a matter a little fire kindleth!

A great sentiment to invoke for a book by Buckley. The Governor Listeth is Chairman Bill at the height of his powers.
Posted by StephenD at 10:04 AM No comments:

Song of the Week: Forty Days

I've never been that much a fan of ska. You'd think it would be up my alley with the drums and guitar riffs of rock layered with the brassy sound of big band. But a lot of bands, and songs from the same band, sound identical. That's not to say there aren't individual songs I like.

This week's song is from a band called Streetlight Manifesto. I like more songs from them than from other ska bands. Also, I used to play basketball with their trombonist (at least the guy who played from 2003-2010). The song "Forty Days" features some good work by him and some catchy riffs.

The Winter of Frankie Machine by, Don Winslow 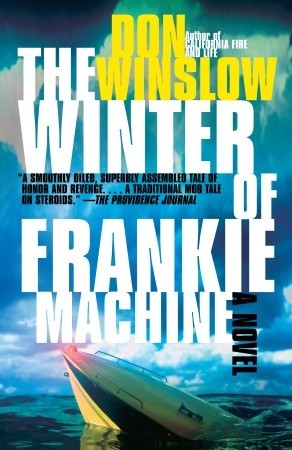 Everyone loves Frank the Bait Guy.

Frank Machianno has settled into a pretty nice routine.  He has an ex-wife, an ex-showgirl girlfriend, and a daughter going to med school. He has his bait shop. He supplies fresh fish and fresh linens to many of San Diego's finest restaurants.  He's the unofficial sheriff of the Ocean Beach Pier. And he's also a retired mob hitman.

When the son of the mob boss Frank used to work for, a snot-nosed little punk named Mouse Junior, feels his porn business is getting squeezed by the Detroit mafia, Jr asks Frank to accompany him on a sitdown. With the legendary Frankie Machine in his corner, he figures he'll get a better deal out of the Detroit bosses than on his own. The Detroit boys say they want to talk to Frank alone first and try to kill him.  Frank takes out both would-be assassins, one of whom is an FBI informant.  Frank's routine is now blown to hell and he's being hunted by the mob and the feds.

The Winter of Frankie Machine is told in a mix of flashback and present-day action. As he tries to piece together who would want him killed (and who would have the juice to get a hit on Frankie Machine sanctioned), he remembers his decades long career as go-to hitman for the San Diego mafia. The world is populated by colorful wise guys with even more colorful names. You've got Frankie Machine, Mouse Senior (and Junior), Billy Jacks, Sherm, Bap, and Momo.

As with all of Don Winslow's novels, this one is told in his fast-paced style with lots of talk about surfing and goes into almost travelogue detail about parts of San Diego and its history.  I liked the book and found it easy to root for Frankie Machine. It's a great novel, but I'd place it a step below the Boone Daniels books and California Fire and Life.

Recommended.
Posted by StephenD at 10:23 AM No comments:

Song of the Week: Some Fantastic

In 2007, Ed Robertson of Barenaked Ladies sat down with a camera and a guitar in his bathroom and recorded solo acoustic versions of 40-some Barenaked Ladies songs. The majority of these songs are the more sedate tunes rather than their crowd pleasers (though "1000000 Dollars" and "One Week" are featured), almost foreshadowing the tonal shift of the band after the 2009 departure of Steven Page.  Page shows up in some of the videos, but it's mostly just Robertson.

These stripped down versions are a fun way to re-evaluate some of their tunes.  I can't tell you how long the bathroom version of "Aluminum" sticks in my head.

This week's song is "Some Fantastic", which was always one of my favorites. I understand there were reasons Page and the band parted ways, but there's no denying the magic of the two of them singing in harmony.