Song of the Week: I Love a Piano

What better way to celebrate this week's release of Tony DeSare's new album Piano then with a song about pianos?

Sing for Hope put pianos all over New York City. Tony went around with two camera guys (dressed like tourists) and sat down and played one song on as many as he could in a day. Here's what happened...

Email ThisBlogThis!Share to TwitterShare to FacebookShare to Pinterest
Labels: music, song of the week, Tony DeSare

MST3K Friday: Hike Up Your Pants!

Song of the Week: The Malcontent

Another song this week from Fastball.  This song is from their 2009 album Little White Lies (which might be my favorite album of theirs).

Here is "The Malcontent (The Modern World)":

Posted by StephenD at 9:16 AM No comments:

Email ThisBlogThis!Share to TwitterShare to FacebookShare to Pinterest
Labels: Fastball, music, song of the week

Song of the Week: Nearly Lost You

Screaming Trees was a rock band from Ellensburg, Washington.  If a lot of bands these days are classified as post-grunge, Screaming Trees is pre-grunge. Their sound, which incorporated hard rock and psychedelic elements, was a large influence on later Seattle bands like Nirvana and Alice in Chains.

"Nearly Lost You" is perhaps their best-known song because of its appearance on the soundtrack to the 1992 Cameron Crowe film Singles.

When I first saw this video I thought it was a good satire put together by some enterprising young Lutheran (or Baptist or...) to point out the vapid, content-free nature of the modern American church growth movement.  It goes to great lengths to show that church isn't some stuffy place filled with old people that your parents forced you to go. Our minister uses an iPod! Church is interactive and fun! And we rap!

Then I went to the website and saw that this is a real thing. The video is actually being earnest.

I don't want to crap over the whole thing. I actually think the tune is catchy, the video is fun, and the attempt to bring more people to church is a good thing. But what compelling reason do they give to attend church? To get an iced coffee? People can go to Dunkin' Donuts. Hang out with your community? People can volunteer with Habitat for Humanity. Have fun? People can go to the park or shore or the movies.

The most compelling reason to attend church is something the American evangelical movement is missing. They've made people believe that God is a cosmic ATM who you just have to pray to to get health, wealth, and happiness.  The Greek origin of the word evangelical is literally one who spreads the evangel, the Good News. That is forgiveness of sins through Jesus Christ. Hearing the Gospel is something you only get from a church. Quick - how many times was Jesus mentioned in the rap? I'll wait while you listen to it again.

I'm not trying to open a debate about religion or convince any non-churchgoers to go to church. This is straight up PASWO blogging. I'm frustrated about church-growth movements that emphasize getting butts in seats over spreading the true Word of God. I'm frustrated with mysticism and moralism preached over forgiveness of sins. I'm tired of Christians being stereotyped as square, then doing things like this to try to counteract the perception only to reinforce it.

Maybe I'm just being cranky. In spite of this post, I'll probably be singing this rap for the next couple days.
Posted by StephenD at 9:44 AM No comments:

The Forgotten Man, by Robert Crais 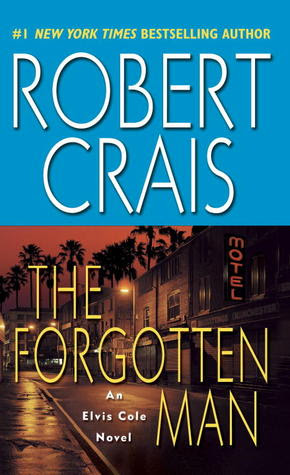 Responding to a gunshot, the LAPD has found an injured man in an alleyway. He has told the officer on the scene that he is looking for his son, Elvis Cole. Minutes later, the man is dead. Cole's been haunted his entire life by not knowing who is father was, so, even though he doesn't believe the nameless man was his father, Cole tries to find out who this man was while grappling with who he is.

I heard someone say The Forgotten Man does for Cole what LA Requiem did for his partner, Joe Pike. In a way, I agree.  We learn more of Cole's back story and why he became a private detective. It's also a more introspective and less wise-cracking Cole than we see in Crais's earlier books.

I don't want to talk more about the plot because there's a lot to give away.

Crais's Elvis Cole series is one of the great modern PI series. You can't go wrong with any of them.
Posted by StephenD at 10:05 AM No comments:

Song of the Week: Berlin

The fifth season of Sons of Anarchy premieres tomorrow night.  Even when they go in a super pulpy or super soap opera direction, you can never say the show is boring. It's a visceral experience from the first frame of the first episode until the last.

Throughout its history they've made great use of music. As far as I know, they've never played any Black Rebel Motorcycle Club.  Putting aside the name, I think their style fits in with the rest of the show's musical choices.  Tell me you can't see a montage of Jax, Chibbs, and the boys cruising toward a fight with this song blaring in the background.

Posted by StephenD at 9:26 AM No comments:

Email ThisBlogThis!Share to TwitterShare to FacebookShare to Pinterest
Labels: music, song of the week, Sons of Anarchy

"Ford Bebe."
"Donner, party of three, please."
"Looks like they all just got out of the shower."

Posted by StephenD at 8:47 AM No comments: 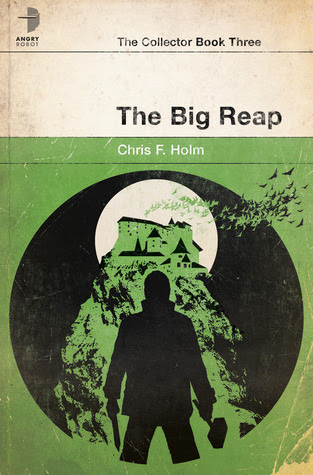 The last thing I remember was dying.

The opening line grabs you, right? Want to read what's next? Damn right, you do.

Starting just minutes after Goodbye ends, we meet up with Sam at the grave of fellow Collector Danny. If you don't remember, Danny was the Collector in the last book who wanted to perform a ritual to free himself from his Collector contract. The ritual was performed by a group of nine Collectors thousands of years ago and produced the Great Flood (you know...the story of Noah?). Sam is picked up by a man calling himself Simon Magnusson, who it turns out is actually one of The Nine. He has plans to put Sam in suspended animation, but Sam fights back and ends up killing Simon. Realizing The Nine can be killed, the truce between them and Heaven and Hell is torn apart and Sam is tasked with collecting the souls of the remaining eight.

If Dead Harvest was Chris F. Holm's tribute to pulp fiction and The Wrong Goodbye was an homage to road/buddy movies, then The Big Reap is his love letter to the old Universal horror movies. Slogging through The Nine, Sam encounters a Dr. Frankenstein type, a Mexican monster (Chupacabra?), werevolves, and even a Dracula wannabe. This is the creepiest, pulse-poundingest installment of The Collector series yet.

Reap is not just about chills and thrills, it's about choices. Our choices define who we are and the choices The Nine, and Sam, have made over the years either enforce or destroy their humanity. In previous books, Sam typically possesses the bodies of the recently dead, but in this one he possesses mostly (entirely?) living bodies. He keeps telling himself it is only because it's the expedient thing to do, but he does start to wonder if he's losing what little remaining humanity he has.

I don't know if Holm is cooking up more Collector books, but whatever he writes, I'm going to read it.

The Collector series is highly recommended.
Posted by StephenD at 9:54 AM 4 comments:

Once Were Cops by, Ken Bruen 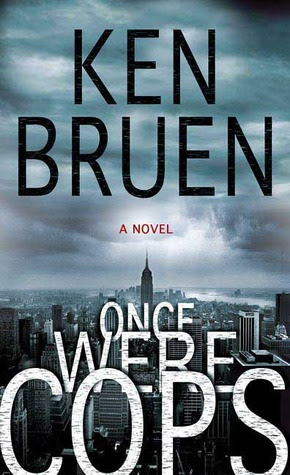 Michael O'Shea is a member of Ireland's police force, known as The Guards. He's also a sociopath. When an exchange program is initiated between The Guards and the NYPD, Shea is more than willing to go to America.  Teamed with a brutal cop nicknamed Kebar, the two unlikely partners become a devastatingly effective force in the war against crime.

Some of the blurbs liken Once Were Cops to James Ellroy's LA Confidential, and that's a pretty fair comparison. We have three male protagonists and they're all nasty pieces of work. Shea is a sociopath and a murder. Kebar is a cop on the take, possibly just bent because all the money he takes is to provide for his mentally challenged younger sister. Many of the characters do violent and deeply disturbing things and everyone is only out to enrich themselves.

This is my first brush with Bruen and I thought the story was well told and moved at a very quick pace. I did think the characters were a bit thin and the ending was a bit too neat. If the villain was as clever as the whole book made him seem, I don't see him falling for such an easy trap. That being said, I enjoyed it enough to put a couple of Bruen's Jack Taylor series on my TBR pile.
Posted by StephenD at 10:44 AM No comments:

Song of the Week: New York State of Mind