The Big Nowhere by, James Ellroy

Book 2 in James Ellroy's LA Quartet series (LA Confidential is #3). Since I didn't do a full review of LA Confidential, I'll have to do part of it here. LA was a great book. There is a lot more to the story (and a lot more twists and turns) than the movie. My one complaint about it was that about halfway through the book, there was a distinct style shift. Ellroy's prose became more stark and staccato. It was almost like he stripped out all adjectives and any non-essential nouns. Like an MTV video where scenes and images keep flashing at you. It's a bit disorienting, but I got used to it. I've heard book 4 (White Jazz) is like that all the way through (which may be why I'm reluctant to pick it up). The Big Nowhere, however, has a constant flow like most novels you read.

Like its follow-up LA Confidential, TBN is the story of three LA cops who end up in a labyrinthine series of connected cases. The stories weave together involving the three big stories in the 1950's City of Angels: labor unions, Communists, and Hollywood. Each man has his own strengths and is deeply flawed in his own way. Ellroy likes to torture his protagonists both emotionally and physically (at least one dies in both novels). Several characters appear in both novels, including Dudley Smith also appears in the all four novels. Ellroy pays homage to the old hardboiled detective story with a twist. The language (from cursing, racial slurs, and sex) to the violence (most off-screen, but we see all the gory results) are distinctly modern. Even the master of sex and violence Mickey Spillane was never as explicit in his descriptions as Ellroy is describing the crimes committed by the perpetrators.

An entertaining read by the modern master of crime fiction. I'll pick up the first book in the LA Quartet (The Black Dahlia) next. Maybe then I'll have the courage to read White Jazz.

Update (11/29/11): In the six (!!) years since I wrote this review, I've read both Dahlia and White Jazz. I didn't have as much trouble with Ellroy's style as young me had feared.  Once you match the rhythm of the words with the rhythm in your head, Ellroy's style is a big part of what makes the books.  He's a profane, perverted beat poet, but I wouldn't have it any other way.  Looking back, I think The Big Nowhere is my favorite of the Quartet.  I picked up American Tabloid at a closing Borders, so I'll have some more Ellroy coming my way before too long.

Song of the Week: The Core

What can be said that hasn't already been said about Eric Clapton?  I'm a fan of Clapton and a huge fan of the band Cream.  The first Clapton solo recording I remember buying is Slowhand, and it's a good one to start off with.  Quite a few tracks have ended up on some Clapton "Best Of" compilation: "Cocaine","Wonderful Tonight", "Lay Down Sally".  Even the lesser known ones are good (I played "Next Time You See Her" over and over when I first bought the CD).

A few weeks ago, I heard "The Core" on a classic rock station.  I forgot how much I liked this song:

Happy Thanksgiving to everyone out there.  Hope you have lots of turkey and some tasty pumpkin pie.

I usually don't do this, but it's been an eventful year here at Unsquare Headquarters.  Here's a random list of things I'm thankful for:

What are you thankful for?
Posted by StephenD at 11:04 AM No comments:

Hell and Gone by, Duane Swierczynski 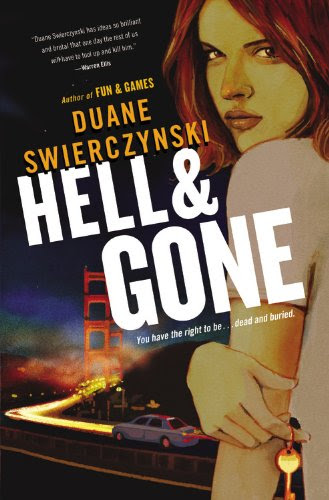 When last we left our intrepid hero, Charlie Hardie was being whisked away by a shadowy organization for some nefarious reason. Well, the reason isn’t so nefarious as you might think: they want Hardie to be the new warden of their top secret prison. Not one to take spoonfed answers, Hardie begins asking uncomfortable questions and uncovers the dirty past of the ultra-secure prison. Could the inmates actually be the guards and the guards the inmates?

Being a Swierczy novel, it isn’t even as straightforward as that. I’m not going to delve too deep into spoiler territory, but I can count on one hand the number of authors who could come up with Swierczy’s twist. Hell and Gone is the second novel in the Charlie Hardie trilogy. This is undoubtedly Swierczy’s homage to the prison movie. Though I can’t help but wonder if the chapters after Hardie’s escape (SPOILER ALERT!) were influenced by Lee Marvin’s Point Blank.

Of the two, I enjoyed Fun and Games more, but Hell and Gone is still a hell of a ride. Duane Swierczynski is one of the most imaginative writers we have and his books are adrenaline soaked thrill rides that keep you turning the pages well past your bedtime. And the last couple chapters have me positively itching for the next book (due in March).

Song of the Week: Bus Stop

Last year, The Hollies were inducted into the Rock & Roll Hall of Fame.  It was well deserved.  Here are two of t heir biggest hits:  Bus Stop and Carrie Ann.

Posted by StephenD at 9:13 AM No comments:

"Doing anything later?" "Yeah, blowing you off!"
"Sand Nazis - I hate these guys."
"You smell like comic books."

Song of the Week: Solitude

Lady Day singing a Duke Ellington song. True, it's a bit meloncholy, but is there anything better than this?

Posted by StephenD at 9:32 AM No comments:

"You're evil and I hope you all have snacks."
"Nice evening. I really should get drunk and hit someone."

Song of the Week: Sick of You

It comes as a shock to many people, but I actually enjoy the band CAKE (my music tastes are nothing except eclectic).  I'm not a huge fan of them, but I like them well enough.  Probably the only album I like from start to finish with minimal exception is 1996's Fashion Nugget.  Every other album has songs I really like and songs I dislike. Their catchy, offbeat lyrics are always fun and their best tunes are ones that stick in your head for days.

Speaking of offbeat, here's the official video for the song "Sick of You" off their most recent album.  At 10 seconds in, I laughed out loud at the visual and kept smiling as long as that character was on the screen.

Email ThisBlogThis!Share to TwitterShare to FacebookShare to Pinterest
Labels: song of the week

Posted by StephenD at 9:15 AM No comments:

The Children of Men by, PD James

January 2021 – no child has been born since October 1995.  Humanity is slowly dying out, the social contract has been ripped up, and an increasingly apathetic population has accepted totalitarian rule.  This is the dystopian future portrayed in PD James’s Children of Men.
I’ve been a fan of the film, starring Clive Owen, since I first saw it, so I figured it was time to read the source material.  Theo Faron, our hero, is an Oxford historian, cousin to the Warden of England, divorced, a loner.  He sees the societal decay around him, but doesn’t care as long as can enjoy his routine and live out the rest of his life unbothered.  A chance meeting with a former student of his, a woman named Julian, jolts him out of his slumber.  She asks him to observe a Quietus (state-sponsored and  -assisted suicide) and speak to The Warden on behalf of her group, who call themselves the Five Fishes, if he is troubled by what he sees.  In doing so, Theo unwittingly puts himself in the crosshairs of the State Police and is forced to go on the run with The Five Fishes.  Early on in the journey, Theo discovers one of the women is pregnant and has to decide if he wants to run with them, or turn the woman  over to The State for proper medical attention.
Much to my surprise, they are very different animals.  The book focuses mainly on the crushed human spirit, the questioning of faith, and how much society is tuned toward improving things for the next generation.  The movie has these same themes, but focuses more on the reactions of people who find out that there actually is a pregnant woman and what Theo does to protect the woman and her unborn child.
Both the book and the movie feature indelible images.  The key set piece in the movie is the assault on the Isle of Man (a location only referenced in the book), which is a nearly 10 minute single tracking shot; one of the finest pieces of cinematography in the past decade. The book on whole is a quieter affair, and so are its images.  One thing that particularly sticks out is about 40 pages in when Theo encounters a deranged woman pushing a doll in a pram – just like she would have a real baby.
With society in such decline, a lot of people question and fall away from their faith in a God (any God). The believers and unbelievers are given worthy advocates in Julian and Theo respectively.  Actually, the open struggle of the question of faith and Theo’s actions in the book’s second half (as well as the persecution angle) put me in mind of The Power and the Glory.
If you go into the book expecting the action of the movie, you’ll be disappointed.  That is not to say, however, that the book is a disappointment.  Dystopian science fiction has always been a good allegory, pointing out the flaws of present society.  In that regard, Children of Men is a worthy, well-written example of the genre.
Posted by StephenD at 10:39 AM No comments: