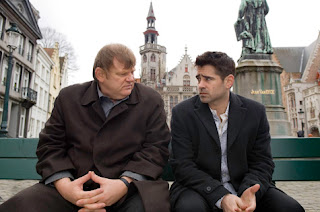 After a job gone wrong, hitmen Ray (Colin Farrell) and Ken (Brendan Gleeson) are ordered by their boss Harry (Ralph Finnes) to flee London.  He puts them up in a hotel in Bruges, Belgium.  The two men see the sights of the ancient city and talk about life, death, and redemption.

In Bruges (2008) is a really good flick.  Chock full of black humor and keen insights into the human mind.  It's not quite a spoiler to say this, but in the course of the hit, Ray accidentally kills a young boy.  He's wracked with guilt and wonders if he's a bad person.  Ken, the old pro, attempts to console Ray and begins to wonder if he's really cut out for the job Ken's been doing for 30 years.

I like a lot of the artistic choices first time director Martin McDonagh made.  There are a lot of long shots (no 2 second edits like in most recent films) that focus your attention on the tremendous acting job by the leads.  The shots are beautifully composed too, using the medieval setting of Bruges to full effect.  There are even subtle callbacks to earlier films as well.  One night while Ray is out on a date, Ken sits alone in their hotel room waiting for Harry to call.  Ken is watching Orson Welles's marvelous Touch of Evil on television.  We see the famous five minute tracking shot that begins the movie (complete with Henry Mancini's score).  When the phone rings, the viewer is treated to a continuous five minute take of Ken talking on the phone to Harry.  It's a nice display of artistry that is never seen these days.

In Bruges is R-rated and with good reason.  There's some blood (but the camera doesn't linger on the gore) and a lot of cursing.  According to IMDb, the f-word and its variants are used 126 times in the movie's 108 minute running time.  There's a little drug use and some hilarious jokes about racist dwarves.

To sum up, I thoroughly enjoyed this movie and would recommend it to friends.

Check out the trailer here.
Posted by StephenD at 10:00 AM