"Hello, Sigfried." "Hello, Roy."
"I'm here for the Prince Valiant auditions."
"This is the kind of music Up With People rejected."

Posted by StephenD at 9:33 AM No comments:

Came across this post the other day by Stephen Blackmoore (now there's a bloke who knows how to spell his first name correctly). It's a nice little birthday tribute to one of my favorite authors: Raymond Chandler.

While working in New York a few years back, I decided to dip my toe into some of the classics of the crime genre.  I was (and am) a big fan of films noir, so I figured I'd read the source material for some of my favorite movies.  After about 50 pages of The Big Sleep, I logged on to Amazon and bought the remaining Marlowe novels.

I'll quote Mr. Blackmoore here because it sums up what I think is Chandler's lasting appeal.

Reading Chandler is like reading poetry. It's rhythm and flow. More to evoke mood than move plot it somehow manages to do both. He was a storyteller who could charm you with the music in his writing and you wouldn't care if he actually made sense.

There are many authors (too many to count) who were influenced by Chandler.  Some of them are good.  Many of them just try to ape his similes and miss out on the "music" part of his writing (not to mention the actual complexity of the Marlowe character).  Reading them is like watching a whale knit.

That being said, I'll leave you with a couple of my favorite lines.  Feel free to add your own in the comments.

"Even on Central Avenue, not the quietest dressed street in the world, he looked about as inconspicuous as a tarantula on a slice of angel food." - Farewell, My Lovely (1940)

Song of the Week: Lo Que Me Hace Vivir

I talked about him briefly last year, but I'm a big fan of Cuban pianist Roberto Fonseca. Here's the second track from his 2010 release "Akokan" entitled "Lo Que Me Hace Vivir".

Posted by StephenD at 9:35 AM No comments:

"Jim never drinks coffee on our home planet."
"Let's get over the the car." "Yeah, the bullets don't hurt over there."

Posted by StephenD at 9:41 AM No comments:

For Tom and Anna Reed, this isn't merely a thought exercise, but an actual decision they have to make. The Reeds are your average American couple - mid-30's, trying to have a child, and in debt up to their eyeballs. To help pay the mortgage on their Chicago home, they rent a basement apartment to a man they barely know. One night, they respond to a fire alarm downstairs and find their tenant dead. In the process of putting out the fire, they stumble upon almost $400,000 in cash.

The tenant has had no family or friends visit him in the months he rented the space, so they figure it's OK to take the cash as their own. Little do they realize the cash comes from a heist the dead man pulled off. Now his associates, a nasty drug dealer, and the cops are all breathing down their necks.

I'm a huge fan of Sakey's (after reading his first book) and he's done another fine job with Good People. The characters all feel real and have real reactions. Our protagonists are two ordinary people thrown into a world of thieves and murderers by one bad decision. Their terror at having their lives thrown upside down is palpable.

Sakey raises more questions than you'd normally find in a thriller. At the start of the book, Tom and Anna are "good people". They take money that doesn't belong to them, but still consider themselves good. They lie to the cops. They lie to the thieves. They essentially serve up on a silver platter a man to be executed. But, like a lot of people in the modern world, they are blind to their own hypocrisy and stick to their moral superiority. These are folks who, at the end of the story, perform heroic actions, but are themselves not heroic.

Good People is a solid thriller, with more heft than normally found in the genre, told by a master stylist.

Recommended.
Posted by StephenD at 11:10 AM No comments:

Song of the Week: Greenbacks

How about some lively Ray Charles to start the week?

Posted by StephenD at 9:35 AM No comments:

Posted by StephenD at 9:36 AM No comments:

Song of the Week: Uptown Girl

Posted by StephenD at 9:42 AM No comments:

After a brief hiatus, MST3K Friday is back.

"He's learned to modulate his flatulence."
"Jack Ruby at home."

Fun and Games, by Duane Swierczynski

Move over The Blonde.  I might just have a new favorite Swierczy novel.

Charlie Hardie is an ex-police consultant turned house sitter.  Still reeling with guilt from a tragedy three years ago, Hardie has given up his family and any semblance of a normal life to become a nomad; moving from rich person's house to rich person's house.  Content to punch the clock by drinking beers and watching old movies (sounds good to me), Hardie wants to escape his old life rather than trying to move on.

His latest gig comes with an extra surprise:  a B-List movie starlet blitzed out of her gourd and ranting about a group of hitmen known as "The Accident People".

One thing I always love about Duane Swierczynski's books is his far out concepts.  A woman who will die if she isn't within 10 feet of another human being at all times?  A mute Irish getaway driver?  Expired Tylenol that takes you back in time?

And each book is a slam-bang thriller that grips you from page one.  I think there wasn't a single second either one of our heroes wasn't in peril until about page 190 (no exaggeration).  OK, there were some moments that strain believability - specifically how much damage some of the characters can take and still live.  But if you put yourself in the mindset that this is like a Die Hard or Speed or any number of older action movies, you'll have no problem with it.

Like the blurb on the back of the book said, "This is more exciting than what you're reading now." Swierczynski is the guru of fast-paced thrillers and needs to be more widely read.

Highly recommended.
Posted by StephenD at 9:52 AM No comments: 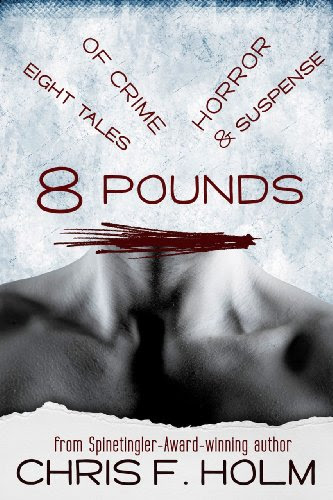 I stumbled across author Chris F. Holm about a year ago when I read his story "The Toll Collectors" at Beat to a Pulp. I instantly became a fan and tried to find as many of his online stories as I could. Happily for us, he released a collection of his stories for Kindle back in October.

8 Pounds is a collection of eight crime, horror, and suspense stories that are a great showcase for Holm's talents. The collection starts off with "Seven Days of Rain", a gripping story which is like the great, great grandson of "The Telltale Heart". The story is infused with a palpable sense of dread from word one.

"The Toll Collectors" features a hitman haunted by his sins and trapped on an abandoned section of the Pennsylvania Turnpike. This one got to me because I've driven the Turnpike many times over the years making trips from NJ to Pittsburgh.

"The Big Score" is a straight up crime tale with double and triple crosses vividly set in a small port town. The way Holm reveals the pieces of the puzzle shows he really knows how to write a well-crafted tale.

If horror is more your speed, go for "A Better Life" and "The Well". If you're not creeped out, then you have no soul.

Chris F. Holm is one of the finest writers working out there today. He has the ability to render sympathetic characters and create vivid landscape with the minimum amount of words necessary. He deserves to break out and 8 Pounds is exhibit A when making the case.

Song of the Week: US National Anthem

Happy July 4th everyone.  I may be a fan of Pittsburgh's sports teams, but nobody does the national anthem better than the Philadelphia Flyers's Lauren Hart.  Check out this rendition:

Posted by StephenD at 5:48 PM No comments: