I stumbled across a blog the other week that has weekly film pairings (among other interesting posts). A couple Fridays ago, the post was about a trio of detective movies starring Frank Sinatra. They sounded interesting so I gave them a shot. 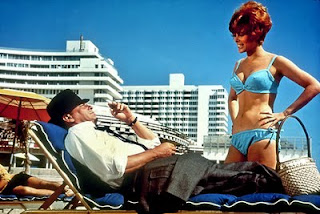 The first is Tony Rome (1967), starring Sinatra, Richard Conte, and Jill St. John in a bikini. The movie is a solid PI flick featuring a wealthy family whose members are all keeping secrets from one another. Ross Macdonald would have a field day with these folks. At one point, Sinatra is hired by the daughter to find her missing pin, the father to find out what his daughter is keeping from him (he doesn't know about the pin), and the mother so Sinatra will tell her what he finds out before he tells her husband. Like any good PI story, as soon as Sinatra thinks he's making headway, another lead turns up dead.  At one point I almost laughed out loud at how many bodies there were. 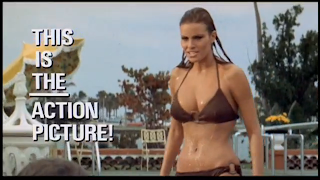 Speaking of laughing out loud, a sequel called The Lady in Cement was released a year later.  This picture again stars Sinatra as Tony Rome, Richard Conte as his homicide detective friend, and this time has Raquel Welch as the woman in the bikini.  Oh, and Dan Blocker (of Bonanza) fame.  This movie starts out with Sinatra finding the body of a woman while he was diving off the cost of Florida.  He works to find out who she was and who killed her.  This time around, the crime doesn't seem as important.  It's just big, goofy fun with more quips, wisecracks, and Rat Pack-era charm.  Not a bad flick, but I enjoyed the first one a lot more.

Give them both a shot, but if you can only watch one, watch Tony Rome.

Trailer for Tony Rome:  here
Trailer for The Lady in Cement:  here
Posted by StephenD at 9:11 AM No comments:

Email ThisBlogThis!Share to TwitterShare to FacebookShare to Pinterest
Labels: movies

Song of the Week: Thank You Girl

Things have been rough at Unsquare HQ recently.  Thing song goes out to a special someone who is helping me through this:

Posted by StephenD at 9:05 AM No comments: 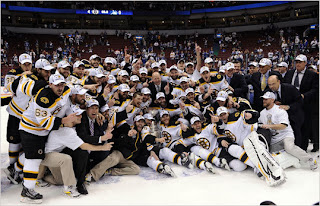 Well, got another prediction wrong, but I'm not too surprised.  I've been touting Boston for a couple months as the Beast of the East.  The Bruins's physical style (typical of the Northeast and Atlantic divisions) wore down Vancouver as the series wore on.  Vancouver sorely missed the services of d-man Dan Hamhuis and couldn't solve Tim Thomas.  Even in the games they outshot Boston, not too many of the shots were good scoring chances.

What can you say about Thomas?  He was clearly deserving of the Conn Smythe trophy he won.  He stepped up his game and was nearly unbeatable, becoming the 4th goalie to record a Game 7 shutout - the first to do so on the road.

Haven't looked back at my predictions, but I think I only got three wrong during the whole playoffs.  Not too shabby.
Posted by StephenD at 9:55 AM No comments:

Email ThisBlogThis!Share to TwitterShare to FacebookShare to Pinterest
Labels: hockey

Tonight, the Boston Bruins (3) and the Vancouver Canucks (1) face off for Lord Stanley's Cup.  Both teams have had their ups and downs this season and during their respective playoff runs.  Boston survived a tight seven game series with the Tampa Bay Lighting to emerge as the Eastern Conference Champion.  Vancouver had a tough first round series vs Chicago, but hit their stride with a six game win vs Nashville and a five game win vs San Jose.

No lie, if you asked me at the beginning of the playoff who did I see in the Cup Finals, I would've said Boston and Vancouver.  Vancouver has just had the air of a team finally getting it together this season, and Boston's Tim Thomas has been back in form this season.  Both teams have stellar goalies and like to hit.  This is going to be a fast, physical series.

Special teams, as always, are going to be important.  Both teams had good penalty killing, but Boston's power play has not clicked at all this playoff season.  Vancouver, on the other hand, is hitting at almost 24%.  Unless Boston can straighten out their power play, this could get ugly fast.

Ryan Kesler has played like a man possessed in this year's playoffs.  Even a late injury vs San Jose couldn't keep him down.  Is he fully healed from that?  Who knows. If he continues to play at the same level, he's a strong Conn Smythe contender.

Boston has had timely contributions from rookie Brad Marchand (6 goals, 6 assists for 12 points in 18 games).  He is a strong penalty killer and has a knack for scoring timely goals.

Someone's going to get their heart broken.  Boston hasn't been to the Finals since 1990 and haven't won since 1972.  Vancouver was last in the Finals in 1994 and have never won in their 40 year history.  On top of that, no Canadian team has won the Cup since Montreal in 1993.

There's a strong possibility that this can go 7, and I'm going to watch every second of it.  My final prediction this year:  Vancouver in 6.
Posted by StephenD at 8:58 AM No comments: