"I'm not sorry for that one, that felt wonderful."

Posted by StephenD at 8:56 AM No comments:

Song of the Week: Breakdown

Like a lot of folks I first heard this song in episode 3 of season 2 of The Shield. It really jumped out at me and I had to track down the band. They're called Tantric and it was founded by former members of Days of the New.

Here is the first track of Tantric, "Breakdown":

Posted by StephenD at 9:24 AM No comments:

Email ThisBlogThis!Share to TwitterShare to FacebookShare to Pinterest
Labels: music, song of the week, The Shield

"He's still cleaning his glasses."
"His combover is making a run for it."

Posted by StephenD at 9:28 AM No comments:

One of Nat's early successes:


This one was always one of my favorites:

Joe Morello, jazz drummer most famous for his work with the Dave Brubeck Quartet, died this weekend at the age of 82 in Irvington, NJ.  The New York Times has a very good obit here. Also, there's one at NPR with a statement from Brubeck and his wife Iola.

The loss of my friend Joe Morello came as a complete shock to me. Many people consider the rhythm section of Eugene Wright and Joe Morello in my Quartet as being one of the most consistent, swinging rhythm sections in jazz. Joe was a pioneer in odd-time signatures and a vital part of the "time" series the Quartet made at Columbia Records. His drum solo on "Take Five" is still being heard around the world. Drummers world-wide remember Joe as one of the greatest drummers we have known. He was a good friend. Eugene and I talked yesterday about how much we will miss him.

Here's a video of the classic "Take Five":

Song of the Week: The State Of Massachusetts

Since St. Patrick's day is this week, here's a song from Dropkick Murphys (no, not their super famous one or the one that was in Sons of Anarchy).  This song is "The State of Massachusetts" from their 2007 album The Meanest of Times.

The official music video of the song is here, but they don't allow embedding.
Posted by StephenD at 9:12 AM No comments:

MST3K Friday: I Was A Teenage Werewolf

"Please, you're my guidance counselor."
"Hi. Did you fail too?"

Posted by StephenD at 9:10 AM No comments:

Screen legend Jane Russell died last Monday at the age of 89. She's most famous for her assocation with Howard Hughes's The Outlaw, Gentlemen Prefer Blones with Marilyn Monroe, and maybe even The Paleface with Bob Hope. I own the last two on DVD and have watched them on more occasions than I can count.

Reading one of the obituaries of her, I found out that she starred in two pictures with Robert Mitchum: His Kind of Woman (1951) and Macao (1952). I was able to track both down and watched them this weekend. They're billed as films noir, but they're not quite. They both have elements of noir, but would be better categorized as thrillers or straight dramas.

In His Kind of Woman, Mitchum plays Dan Milner, a gambler who's in deep with some powerful folks.  He's offered a large sum of money to go to a Mexican resort and wait for further instructions.  On his way, he meets singer Lenore Brent (Russell) who is headed to the same resort.  What they don't know is gangster Nick Ferraro (Raymond Burr) wants to have a plastic surgeon alter his face to look like Milner, and send Dan on a permanent vacation.  Russell is mostly absent from the second half of the picture, but we get a fun performance by Vincent Price as a hammy actor.  Russell gets two songs, though.

In Macao, Mitchum is Nick Cochran, a man hiding out from his shady past.  He runs into singer Julie Benson (Russell) and another American played by William Bendix on the ferry to Macao.  Later on in the movie, we learn that Bendix is a cop headed to Macao in search of a murderer.  He plans to use Cochran as bait to lure the gangster past the three-mile limit and into international waters so he can be arrested.  Eagle eyed fans will recognize the gangster's girlfriend as Gloria Graham (In a Lonely Place).  Two more songs in this one by Russell.

You can't beat the old trailers:

Posted by StephenD at 9:23 AM No comments:

Song of the Week: A Taste of Honey

Quite often when I see the name of the website "A Twist of Noir", I think of this Beatles tune. Why? I have no idea. Because they're both four words with the same number of syllables? Maybe I'm just crazy.

Since Oscar Night was Sunday, I thought it would be a good time to watch a movie starring Tor Johnson and directed by Coleman Francis.  Yes, it was The Beast of Yucca Flats.  Lots of good riffs by Mike and the Bots.  Since the main movie was so short, they riffed two shorts beforehand:  "Money Talks!" (which I posted some time last year) and this week's experiment "Progress Island, USA".

"Here money is exchanged for coconuts."
"We're flying in another trumpet section."

Posted by StephenD at 9:24 AM No comments:

The Black Echo, by Michael Connelly 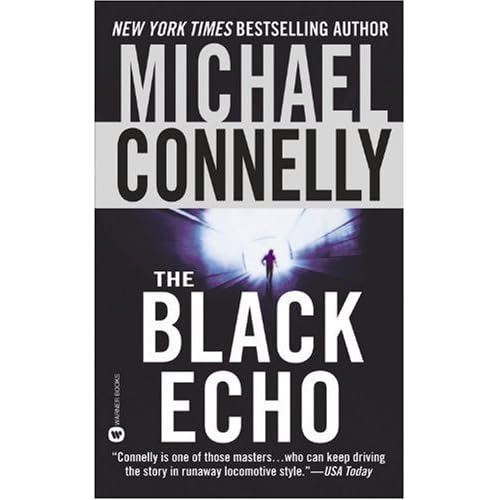 A hophead Vietnam vet is murdered and stuffed in a drain pipe.  LAPD Detective Harry Bosch catches the call and recognizes the victim as tunnel rat William Meadows - a man with whom Bosch served.  The investigation leads Bosch to a pawn shop robbery and eventually a year old bank heist.  Was his buddy Meadows involved in the heist?  Was he killed to cover up his role in it?

This is the first Connelly book I've read.  My only previous exposure to him is through the New York Times's old Sunday serial section which published his novella The Overlook.  I really enjoyed The Overlook, but there were parts of Black Echo that dragged on.

Maybe it was too slow in the beginning.  Maybe Connelly is a little dry (forgiven since this is his first book).  But I like the character of Bosch and I like the little details Connelly gets right.  Bosch has to decide what he wants to put in and what he wants to leave out of his murder book (the fact that he had a murder book is extra points).  The slang, inter-office politics, and the fact that Bosch talks through the case over and over until he gets the details right lend this book some veracity that you normally don't see in books of this type.

Any Michael Connelly fans out there?  What's your favorite Bosch book?  The one I keep hearing as his "best" is The Last Coyote.  Should I read that next?
Posted by StephenD at 9:45 AM No comments: