I read this nice little review of the new DVD set of best series ever over at DVD Talk. Yup. The Shield is coming out as a single box set next Tuesday. I can't praise Shawn Ryan enough for the work he did on this show (and thanks for posting the review on your Twitter feed). 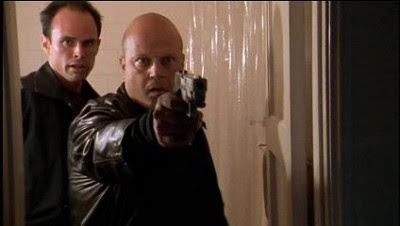 Since the Christmas season is upon us, let me quote Clark W. Griswold and say "Hey. If any of you are looking for any last minute gift ideas for me, I have one..."
Posted by StephenD at 9:54 AM No comments:

Email ThisBlogThis!Share to TwitterShare to FacebookShare to Pinterest
Labels: The Shield, TV

"When we return to our planet, the high court may well sentence you to TORTURE!"

"Are you waiting for a bust?"

"The difference between a pub and a bar is that a bar has more mirrors to show you how f---ed up you are."

Cal Innes, ex-con and unlicensed PI, is hired by local mob boss Morris Tiernan to locate a blackjack dealer, formerly in the employ of Tiernan. The dealer has stolen a fair amount of money from Tiernan, and also absconded with the boss’s 16-year-old daughter. To make matters worse, Tiernan’s son, the psychotic Morris, Jr. (aka Mo), doesn’t like the fact his father hired Innes. He starts his own investigation and generally makes Cal’s life miserable.

Saturday’s Child is a terrific blend of humor, violence, drinking, and hidden family secrets – just like all good noirs. The book opens with Cal getting in a fistfight in the bathroom of a local bar and continues chugging along at breakneck speed.

I was already somewhat familiar with Banks and Cal Innes from the short stories on Thrilling Detective and other websites. My memory’s a bit hazy (since it’s been a while), but I remember some of the stories being great and some being kind of hard to read as the characters had thick Cockney accents and used lots of British slang. That’s probably one of the reasons I waited so long to read Saturday’s Child. I should not have been so concerned.

The book is split into two narratives: Cal’s and Mo’s. Cal is a PI, and his style pretty much follows the conventions of the character. Mo, on the other hand, is like a modern day Alex DeLarge – with a lot more profanity. I found reading Mo a lot like reading the later James Ellroy books – once your head matched the rhythm of his speech patterns, everything was peachy.

Banks is another one in the great crop of young writers making their mark. I’m definitely picking up the next in the series and when the other Innes books are released in the US, I’m buying those too. Buy the book. Read the stories.

Highly Recommended.
Posted by StephenD at 12:34 PM No comments:

Frank Ryan is a man with a plan. The slick used car salesman has a list of rules for success and happiness, but what he needs is a partner. Enter Ernest Stickley, Jr. Ryan catches Stick trying to boost a car from his lot, but instead of busting him, makes him an offer he can’t refuse. The two go on a crime spree that puts all of Detroit in the palm of their hands – until they start breaking the rules.

Ryan’s Rules are as follows:

1. Always be polite on the job, say please and thank you.
2. Never say more than is necessary.
3. Never call your partner by name – unless you use a made-up name.
4. Dress well. Never look suspicious or like a bum.
5. Never use your own car. (Details to come.)
6. Never count the take in the car.
7. Never flash money in a bar or with women.
8. Never go back to an old bar or hangout once you have moved up.
9. Never tell anyone your business. Never tell a junkie even your name.
10. Never associate with people known to be in crime.

Swag is one of Elmore Leonard’s early crime novels, and it’s one of my favorites. I think I was more than 100 pages into it when I realized I had no idea what the conflict would be. But I didn’t care. The characters were interesting and the storytelling was slick, so I was content to sit back and enjoy the story.

Recommended.
Posted by StephenD at 10:54 AM No comments:

There are so many great stingers this season.

And Now For Something Completely Different....

Today marks the 40th anniversary of the debut of Monty Python's Flying Circus on the BBC. I always loved the zaniness of the five Brits and one American. Here are some of my favorite Python sketches:


The Ministry of Silly Walks:


I haven't been able to find it online yet, but the Pythons even did an entire skit based on train schedules....and it was funny!

So, go ahead and celebrate today with some spam or some raspberry tart without so much rat in it.
Posted by StephenD at 9:48 AM No comments:

Some of the bigger jokes from one of my favorite late season episodes - "Pumaman".

Posted by StephenD at 9:07 AM No comments: