One of the National Review writers said it best: words fail.

The father of modern American conservatism, William F. Buckley, Jr., died this morning at the age of 82. People of all political stripes came to respect his class, wit, and intellectual prowess. Others can give better accountings of his life and work. But I'll just say that he brought intellectual weight to the conservative movement mid-20th Century that made it a viable alternative to the status quo progressivism. His actions help legitimize the goals of the movement and drive out some of the kooks (ex. the John Birch Society).

I never met the man, but I feel that given the chance, I would've felt the same as a number of NR writers: I would be afraid of making a fool of myself in front of such an intellectual giant. I did, however, receive a letter from him congratulating me on an award I won several years back. From public figures, such as he was, you would expect a form letter signed by an auto-pen. This could've been the case, but knowing how National Review is run plus a couple things about the letter itself, I like to believe that it was actually from him.

The image of Buckley in my mind's eye will always be like the one below. A young(ish) Buckley leaning back in a chair with a big grin, probably after making a witty comment. 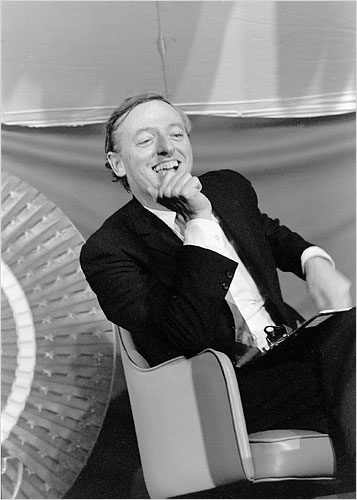 He will be missed.

UPDATE: As could be expected, lots of people are finding this post because they're interested in WFB's funeral. According to K-Lo on The Corner yesterday, "The memorial service for William F. Buckley Jr. will be at 10 A.M. at Saint Patrick's Cathedral on April 4. It will be open to the public."
Posted by StephenD at 8:21 PM No comments:

I mentioned this Nicholas Ray film a couple months ago while plugging the site Noir of the Week. I recently had the opportunity to see it, and I was not disappointed. Tight story, good direction, and an outstanding performance by Humphrey Bogart. Bogart stars as screenwriter Dixon Steele, a talented screenwriter whose last few pictures haven't done very well. At the beginning of the film, he's hired to adapt a bestselling novel into a screenplay. Rather than read the book, he has a hat-check girl tell him the story. The next day, the girl is found dead, and Steele is the main suspect. Steele's neighbor Laurel Grey, played by Gloria Grahame, provides him an alibi. A relationship blooms between the two of them, but the cloud of suspicion over Steele's possible involvement with the murder threatens to ruin it.

I bring the film up again because a stumbled upon a great post by Kim Morgan at Sunset Gun about it. It too me a while to track down a DVD copy (most of my local Blockbusters did not carry it), but it was worth the effort.

Highly Recommended.
Posted by StephenD at 11:03 AM No comments: