Song of the Week: Blues All Around Me

I've seen clips of Tommy Castro playing with other blues guitarists I like and I was not impressed. The other guys always seemed to blow him away. But I like what I've heard on XM's Bluesville channel. For example, this week's song, with it's smoking horns and tight groove bass line.

Protect And Defend by, Vince Flynn 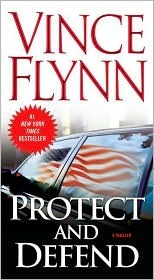 When Mossad executes a daring plan to take out Iran's newest nuclear facility, the Iranian government spins up its propaganda machine and blames America. CIA Director Irene Kennedy attempts a back-channel negotiation with her Iranian counterpart, but is kidnapped shortly afterward. It's up to our hero, Mitch Rapp, to save her before time runs out.

I've been a fan of Vince Flynn for years, but don't read him as regularly as I used to. He knows how to craft exciting stories and Protect and Defend is no exception to the rule. You know what you're getting from a Mitch Rapp book and that's what you get from this one. It's a tight story that's well told. I really liked the opening gambit that destroyed Iran's nuclear facility.

Another solid entry in the Rapp series.
Posted by StephenD at 8:27 AM No comments:

Song of the Week: Ironic Twist

This week's song is from bluesman Jimmie Vaughan. He has a new trio album out, but this song is from his 1998 album Out There. It's got a nice tight groove, some stellar guitar by Vaughan, and the distinctive sound of a Hammond B-3.

Song of the Week: Photograph

For some reason this Ringo song has been in my head for a couple days. He co-wrote this song with George Harrison. I thought I'd share.

Posted by StephenD at 8:46 AM No comments:

Song of the Week: Christo Redemptor

What does the blues have to do with Easter? Probably not much, but this week's song is "Christo Redemptor" by Charlie Musselwhite.

Posted by StephenD at 8:35 AM No comments: