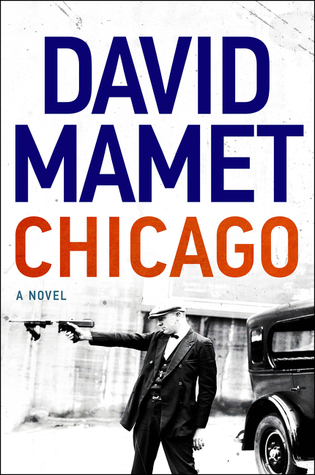 Mike Hodge is a WWI vet and a reporter for the Chicago Tribune. Prohibition-era Chicago is a rough place with the war between the Irish, Capone's mob, and the Feds. Hodge's ingenious idea of getting the inside scoop is to hang around flower shops because people always send flowers to a wake. This is where he falls in love with the daughter of an Irish shopowner. Their love affair is cut short and Hodge spends a good chunk of the book piecing together why.

David Mamet is known for the rhythmic quality of the dialogue in his plays. It doesn't quite translate onto the written page where the sentences have numerous dependent clauses and start and stop many times. It could work if one character spoke like that or if there were moments when a character did, but almost all the characters do it all the time and the narration follows the same pattern. It causes the characters to sound unnatural and as if they're pontificating on life, the universe, and everything.

Mamet does craft some good sentences, though. There are multiple chapters whose first lines could easily serve as a great first line of a novel. For example, Chapter 4 starts with this line: "Jackie Weiss, Mike wrote, had died of a broken heart, it being broken by several slugs from a .45."

Ultimately, the early pacing problems and the florid language drag down what could have been an outstanding book.
Posted by StephenD at 8:18 AM No comments:

Song of the Week: Exodus

Song of the Week: Synchronicity II

Posted by StephenD at 8:20 AM No comments:

Means of Ascent by, Robert A. Caro

Means of Ascent is the second book in Robert Caro's extensive biography of the 36th President of the United States. This volume picks up where the Path to Power left off and takes us through the 1948 Senate campaign that saw LBJ become the junior Senator from Texas.

As in the first book, Johnson's character is put under a spotlight. He remains abusive to his staff and wife. He's an outright lair. He spread falsehoods about his opponent Coke Stevenson in an effort to destroy his reputation. He lied about his wartime record, which amounted to flying an observer for 10 minutes on a single bombing mission over Japan.

Johnson pioneered many modern campaign techniques in his 1948 campaign. While his opponent traveled via car, LBJ traveled across Texas in a helicopter, allowing him personal contact with many more potential voters. He outspent his opponent nearly 10 to 1, shattering records for the most expensive Texas campaign ever. And he blanketed the state with radio broadcasts three times a day, fake newspapers with negative stories about his opponent, and used the modern technique of repetition to drive his points home and make people believe his lies. And this all that, he still had to resort to stealing the election by stuffing ballot boxes and modifying already filed returns.

Means of Ascent has the same strengths and weaknesses as Path. It is deeply researched. It also suffers from lots of repetition. The long biographical digressions remain. The first volume contained a complete biography of Sam Rayburn before he met Johnson and this one contains a full biography of former Texas governor Coke Stevenson. They're both interesting and could be books on their own, but I'm not sure if that much detail is necessary here.
Posted by StephenD at 8:50 AM No comments:

Song of the Week: I Was Made To Love Her

Stevie Wonder is one of the greatest.

The Salmon of Doubt, by Douglas Adams

When Douglas Adams died in 2001, he left behind millions of books sold, millions of fans, and scattered bits of writing on Macintosh hard drives. The Salmon of Doubt culls together numerous essays he wrote, interviews, a couple short stories, and bits of an unfinished novel. The essays range from autobiographical to musings on technology and all contain his trademark whit. Adams himself mentions how much he was influenced by Monty Python and you can definitely see their shared sense of humor.

The most tantalizing bit of the book for Adams fans is the unfinished Dirk Gently novel, The Salmon of Doubt. Through the assembled chapters, we join Gently on an investigation where he doesn't know who hired him, so he decides to follow somebody at random because he figures he was hired to tail somebody. It's a great start to a story that this fan wishes Adams could have finished.

The Salmon of Doubt is probably only for hardcore Hitchhikers (is there another kind?). It's a fun visit with Adams and a reminder of how this world could sorely use his brand of mayhem.
Posted by StephenD at 8:01 AM No comments:

Song of the Week: California Soul

This week's song is a good example of the West Coast soul sound from the 1960's. Soaring lyrics, tight groove, and a laid back feel. Just sit back and enjoy.