The Concrete Blonde, by Michael Connelly 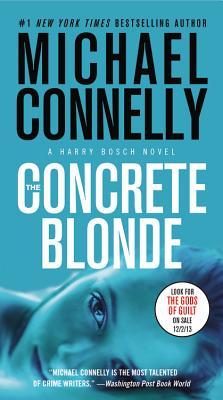 The Concrete Blonde opens with Harry Bosch confronting and killing a serial killer known as The Dollmaker. Chapter One picks up four and a half years later when Bosch is sued by the killer's widow for killing her husband. On the day of opening arguments, a note is delivered to the precinct that points the detectives to a new Dollmaker victim. Even with the trial going on, Bosch must figure out if the new victim is a copycat or did he kill the wrong man.

As a rule, I don't like serial killer stories (movies, tv, books). I find them tedious and repetitive. The killers typically dispose of their victims in creepy ways and almost always taunt our hero detective with notes or phone calls. One of my biggest problems with them is motive. Ninety-nine out of a hundred times the killer does what he does because of some childhood trauma and he ends up killing some version of his mother over and over. Give me someone who kills because of love, hate, jealousy, or mistake and compounds that first action by making further bad judgments throughout the book. It's much more realistic.

That being said, Blonde is an example of how to pull off this kind of story well. The focus is mainly on Bosch trying to figure things out with only a small amount of the typical cat-and-mouse routine. There is also a lot centered on the trial and watching the two lawyers set traps for each other. Bosh is the center of this book, not the killer.

Because Connelly is such a good writer, I enjoyed this one.
Posted by StephenD at 7:42 AM No comments:

Song of the Week: Born in Chicago

This week's song is a blues tune from the Paul Butterfield Blues Band.

Posted by StephenD at 8:22 AM No comments:

Song of the Week; Thank You

Happy Thanksgiving, everyone. I'm thankful for Page and Plant.

Posted by StephenD at 9:08 AM No comments:

Making It All Work by, David Allen

Mainly a companion piece to the original Getting Things Done. The first half of the book talks about the why of GTD and smooths off some of the rough edges of the first book. The second half of the book dives into the horizons of focus, which was a part of GTD that definitely needed some expanding on. It gave me some ideas of how to revamp my current system with a better understanding of the runway, 10k, 20k, etc foot horizons.
Posted by StephenD at 4:01 PM No comments:

Song of the Week: Word Crimes

You've got Weird Al (who I like) and grammar (of which I try to promote proper usage). What could go wrong?

At first, private eye C.W. Sughure is tasked with making a biker pay his outstanding bill for some exotic fish. After that, he goes on a booze- and cocaine-fueled road trip with three buddies from Vietnam in search of the biker's mother who has gone missing. It's a wild ride filed with humor and some great poetic lines that only Crumley could write.

A good read.
Posted by StephenD at 4:00 PM No comments:

Song of the Week: Sooner or Later