Mr. Kiss and Tell, by Rob Thomas and Jennifer Graham

The second book in the Veronica Mars series follows closely behind the first. In this one, Veronica is hired by the Neptune Grand to investigate a woman who claims she was raped and beaten at the swanky hotel. Of course, once she settles the case to the satisfaction of the hotel, she continues to investigate the crime to get justice for the victim.

This book may be a stronger one than the first in the series. It still relies on characters from the TV show and movie popping up to give readers a jolt of familiarity, but the character of Veronica has a bit more life on the page. Still, it's a little annoying that it follows the trope from tie-in novels that almost every character involved in the story is someone from the show. It's a good novel and refreshing to read a crime story that can deliver thrills and emotion without sex, violence, and profanity.
Posted by StephenD at 8:44 AM No comments:

Song of the Week: Believe

This week's song is from Kenny Wayne Shepherd's fourth album, The Place Your're In. A lot of people consider this album a misstep, or, if you're not as generous, a disappointment. It steps away from the blues/rock of his first three and is mostly a rock album. Additionally, Kenny sings most of the songs himself, except for two that he brings Noah Hunt in. In my opinion, these are the two strongest songs on the album. This week's song is one of those two.

The Path to Power, by Robert A. Caro 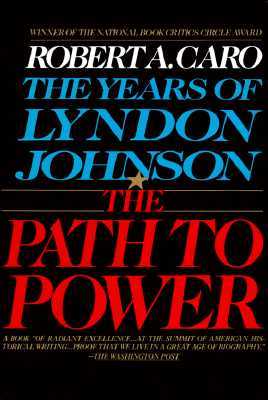 Some men seek power for what they can do with it. Some seek it just to have it. Robert Caro's The Path to Power firmly plants Lyndon Johnson in the second camp. Chronicling LBJ's life from birth (1908) through his first failed attempt at a Senate seat (1941), Caro's exhaustive book repeatedly shows a man obsessed with power and willing to do anything to get it.

Caro extensively lays out what life was like in the Texas Hill Country while Johnson was growing up and during The Depression. The government did a great many things for the poor in this part of Texas such as bringing electricity and paved roads, and you could start to get the idea that Johnson saw the federal government as a great benefactor. But that theory is dashed by his actions as a secretary to Congressman Dick Kleberg. Johnson, and many Southern Democrats, viewed New Deal money as "free money" because it was mostly Northern states who supplied it. Since they were so willing to do so, many Southern states fed at the overflowing trough.

No, Johnson was a son of a bitch almost his whole life. Caro details many examples of his poor behavior at school, including an incident where, when a classmate refused to give little LBJ his pie, Johnson stayed behind during recess and ate the boy's pie while the other kids were playing. He then promptly went outside without even wiping the crumbs from his mouth. Johnson was also abusive to his underlings and downright hostile to Lady Bird. He overreacted to any kind of punishment and was frequently disobedient to his parents.

Even though he was disliked by many, he was able to engender loyalty among a select few. He always sucked up to people above him and occasionally staffers sacrificed any kind of life they had for him.

Johnson had a knack for getting himself into positions of power. He didn't always start out at the top, but he found a way to get himself in charge of handing out jobs. First at college, then as head of the Texas branch of the National Youth Administration. At these positions, and others, he was able to spread people loyal to him across a wide area and put himself at the center of all things. Then, when it came time for him to make the jump to a leadership role, his minions were everywhere.

Caro's book is full of interesting details, but covering 34 years in nearly 900 pages, there is a bit of repetition and bloat. While things like Johnson's lineage and life in the Hill Country provide context for Johnson's actions, the detail is excruciating and could easily be pared down. Also, there is a large segment of Johnson's work at the Democratic Congressional Campaign Committee where Caro details almost every cent sent to congressional candidates and their telegram replies to Johnson.

I will probably read the other volumes in Caro's series on Johnson, but because of the length and how much of a jerk LBJ was, I'll probably take a break before I do so.
Posted by StephenD at 8:12 AM No comments:

Song of the Week: Born With A Broken Heart

Last Wednesday (8/16), I saw Kenny Wayne Shepherd in Morristown, NJ again. As when I saw him in 2014, he put on a great show with a mix of old and new songs, six from the new album, and some blues standards. If he's ever in your area, I recommend you go see him.

This week's song is a song from his first album, Ledbetter Heights, and it's the song that was in my head for the whole week leading up to the concert. Thankfully, he played it.

Song of the Week: Ruby Tuesday

This song has been in and out of my head for a couple days.