Song of the Week: Day After Day

For some reason I woke up Saturday morning with this song in my head. I thought I'd share. According to Wikipedia, the song was written and sung by Pete Ham and produced by George Harrison, who plays some of the slide guitar parts of the song along with Ham. After reading that, I can definitely hear Harrison's touch in the slide guitar solo toward the end.

Here is Badfinger with "Day After Day".

Ceremony by, Robert B. Parker

Kyle's daughter, April, has dropped out of school, ran away from home, and become a prostitute in a seedy part of Boston. He doesn't seem eager to get his daughter back, but his wife is a little more caring, so she hires Spenser to find her.

Ceremony is the ninth Spenser novel by Robert B. Parker, and the first to feature April Kyle. As with all his novels, it's full of tough guy antics, beer, cooking, and interesting moral questions. What would you do with a teenage girl who is working as an underage prostitute, but doesn't want to go home and nobody at home wants her? The next paragraph discusses Spenser's solution, so if you don't want a book from 1982 spoiled, feel free to skip it.

After much thought and debate with his girlfriend, Susan Silverman, Spenser comes up with an ingenious answer to the question. He introduces April to a madam he knows in New York City. April's only marketable skill seems to be having sex for money, so Spenser figures why not let her do it in a nice place and get paid well? Instead of turning half a dozen tricks a night in alleys or parked cars, April will get to do one a night (at most) in a nice hotel and get paid well for it. She can also leave whenever she wants, which is much more understanding than your average pimp. Putting aside that underage prostitution is wrong, Spenser's solution is a humane one and probably provides the best future for April. If he returned her to her home, her parents wouldn't do anything to change, April would run away again to the life and probably get hooked on drugs or get beaten to death by her pimp or a john. With the madam, April would have a sense of security and a freedom she wouldn't have otherwise.

Two additional books feature April Kyle, Taming a Sea-Horse (#13) and Hundred-Dollar Baby (#34), which will probably be my next two Spensers.
Posted by StephenD at 12:54 PM No comments:

Song of the Week: I Done Quit Getting Sloppy Drunk

It's a couple weeks into the new year. How are your resolutions going? Did you resolve to take better care of yourself? Perhaps you wanted to drink less. Well, then here's a fun blues tune for you from Anson Funderburgh and The Rockets. 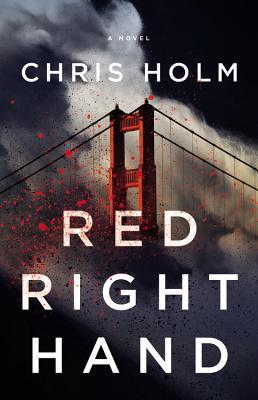 The man staggered into the lobby of the Albuquerque field office shortly after three a.m.

I've been lax in my book reviews lately, so let's see if I can get back into the swing of it. Red Right Hand is the sequel to Holm's prior book, The Killing Kind.  Both feature protagonist Michael Hendricks, a former soldier who is now a hit man of hit men. If Hendricks finds out there's a bounty on your head, he'll kindly inform you and offer to take care of the hitter - for ten times the contract price. In Kind, a shadowy conglomerate of mob bosses finds out about Hendricks and puts a bounty on his head. Chaos ensues.

We pick up Red Right Hand not too long after the events of Kind. Hendricks is now on a mission to take down the syndicate that tried to kill him in the first book. In the meantime, after a terrorist attacks the Golden Gate Bridge in San Francisco, FPI Charlie Thompson notices a long thought dead federal witness in one of the eyewitness videos. Her bosses don't want her to pursue the witness, so she gets in touch with the only man she trusts to keep him safe:  Michael Hendricks.

As with his other books, Holm does an outstanding job describing the action sequences, but the core of the story is the relationship between his characters. Hendricks is more of a loner than in the first book, but his relationship with his new teammate envisions a new level of humanity for the damaged ex-soldier. The geography of San Francisco is presented well, too. I had many flashbacks of my recent trip there.

As with Holm's other books, this one comes recommended.
Posted by StephenD at 12:54 PM No comments:

Song of the Week: Bringing in a Brand New Year