Not Even Past by, Dave White 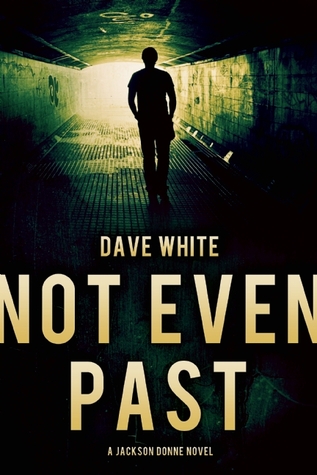 When Jackson Donne saw the eight-year-old picture of himself, he thought the email was the weirdest form of spam he'd ever gotten.

With that sentence, Dave White's New Brunswick based private eye returns to print.  Not Even Past is White's first book in 4 years and the first to feature Jackson Donne in nearly 7.  It doesn't seem that long as White seamlessly brings us back into Donne's life.  In my review of When One Man Dies, I said "White rips Donne’s heart clear out of his chest and stomps on it with a size 13 boot covered in dog crap.". After this book, Donne must wish it was only dog crap.

Three years have passed since we last saw Donne.  He's closed up his private investigator's shop, returned to school, and gotten engaged to a woman named Kate Ellison.  In fact, he's about to graduate and his wedding with Kate is only a couple months away when the mysterious email arrives.  Donne clicks the link and sees a video of his former fiancee Jeanne Baker, who supposedly died in a car crash six years ago, very much alive and in peril. Donne believes the video is real and the only person he can turn to to save Jeanne is his old nemesis Bill Martin.  What starts out as a search for his long-thought-dead former flame eventually pulls Donne into the corrupt world of New Jersey politics.

The book is divided into three sections, each taking its name from a recent local slogan.  "Jersey Comeback" was the tagline for Governor Chris Christie's economic program, while "Restore the Shore" and "Stronger Than The Storm" were rallying cries after the destruction of Hurricane Sandy.  Each could also be applied to the trials Donne goes through in the sections.  The first and third blow through at a breakneck pace, while the middle section gives the characters a little time to breathe.

As always, White has a good grasp of place. Donne moves around New Brunswick, Perth Amboy, and several other locations, and each time the reader feels he or she is really there.  His characters feel like people you'd want to hang out with at a diner at 3am (or in some cases, avoid at 3am).

Toward the last couple chapters of the book, I had a feeling of where White would leave Donne at the end of it and started cursing him for making me have to wait to the next novel for more Donne.

The whole series is Highly Recommended.
Posted by StephenD at 9:28 AM No comments:

Song of the Week: Soul Radio

It's been a while since I posted a Fastball song.  This is another from their 2009 album "Little White Lies". It's been stuck in my head a couple days.

Email ThisBlogThis!Share to TwitterShare to FacebookShare to Pinterest
Labels: Fastball, music, song of the week

Song of the Week: Anyone Who Knows What Love Is

"Anyone Who Knows What Love Is (Will Understand)" by Irma Thomas has gotten some new life recently thanks to Black Mirror, the anthology show airing on England's Channel 4.  Inspired by shows like The Twilight Zone, Night Gallery, and The Outer Limits, Black Mirror examines the less pleasant side of human nature and how it can be exacerbated by technology.

This week's song has been used in two episodes: primarily in the second episode "15 Million Merits" and it gets a reprise in "White Christmas" (which is one of my favorites). "15 Million Merits" is not just a good story, but a remarkable feat of film making. The first 10-15 minutes of the episode manage to convey all the rules of the world and how our characters interact with it with a lot of visuals, but only a handful of lines of dialogue.

MST3K Friday: The Girls of MSt3k

Posted by StephenD at 8:33 AM No comments:

For Valentine's Day this week, here is the great Nat "King" Cole singing about what it's like to be suddenly struck by love.

Posted by StephenD at 8:23 AM No comments:

"Sideburns don't need your sympathy" (what?)

Posted by StephenD at 8:30 AM No comments:

Song of the Week: I've Got You, Babe