Sgt. Pepper is the eighth studio album of The Beatles, released in June of 1967.  It has sold more than 30 million copies, making it one of the world's best selling albums.  Rolling Stone magazine named it #1 in their list of 500 Best Albums of all time.

"A Day in the Life" is one of my favorite Beatles tunes, but definitely too well known to make the cut for this project.  As you can probably guess, the finalists for this week are from Paul and George.

First up is "Fixing a Hole" by Paul McCartney. It's a catchy, upbeat tune that I find myself singing at random times.

Next is "Within You Without You" by George Harrison.  Like "Love You To", this is George embracing both the Eastern influences in instruments (sitar) and philosophy.

But the winner this week is Paul's beautiful composition "She's Leaving Home".

MST3K Friday: It Lives By Night

"Oh, this one's gonna hurt like hell."
"Geez! All he's missing is the feather boa."

Posted by StephenD at 8:44 AM No comments:

Song of the Week from Revolver

Revolver is the seventh studio album of The Beatles and was released in August of 1966. It is generally considered The Beatles's best album, and one of the best albums of all time. I'm more partial to the ones preceding Revolver, but there are a lot of great tracks on this album.

The finalists are:
"Love You To" by, George Harrison. It really takes the sitar and Eastern influences first used by The Beatles in "Norwegian Wood" to a whole new level.

"She Said She Said". Quite often this one randomly pops into my head. Very trippy lyrics and I love the tempo changes.

"Tomorrow Never Knows". Turn off your mind relax and float downstream. I love the opening lyric. This is probably the song that ushered in the more psychedelic era of '60's music.

But the winner is Paul's "For No One". It's a baroque love song about the end of a relationship. Everyone called Paul the cute one and said he wasn't as deep as the other Beatles (still a criticism of him). But this song had amazing heart and is beautifully composed. You can listen to the studio version here, but here's a great version Paul did after The Beatles.

Posted by StephenD at 4:45 PM No comments:

MST3K Friday: Mike Nelson is Lord of the Dance

It looks like I've already posted the Kathy Ireland Song, so here is Mike and the 'bots making fun of Riverdance.

Song of the Week from Rubber Soul

Rubber Soul was released in December 1965 and was only the second Beatles album to contain 100% original material (the first was A Hard Day's Night). Rubber Soul usually comes in the top 10 of albums all time whenever magazines put together lists. It was #5 on Rolling Stone's 2012 list. From the dreamy "Girl" to the sitar infused "Norwegian Wood", the Sixties are in full swing on this one. "Norwegian Wood" is a favorite, but, again, we're looking for the under-represented song.

I'm intrigued by "Run For Your Life". The Beatles are known for songs about love and happiness, but this song is quite different.  If you're unfamiliar with it, the chorus goes "I'd rather see you dead, little girl, than to be with another man". It's not the winner, but it deserves a listen no matter what.


This week's song is "If I Needed Someone":

Posted by StephenD at 8:08 AM No comments: 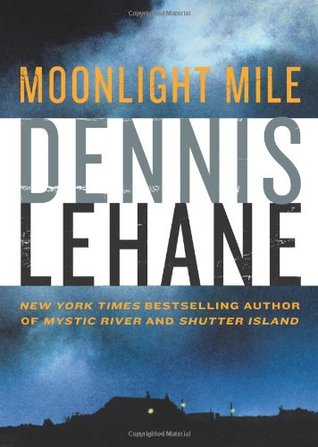 All in all, it was an interesting Christmas Eve.

Amanda McCready was four-years-old when she vanished from her Boston home. The police were short on clues and the people her mother associated with weren't the kind to talk to cops. Amanda's aunt, Bea McCready, hired private investigators Patrick Kenzie and Angie Gennaro to find her; which they did.  Now, twelve years later, Amanda is sixteen and missing again. Haunted by their consciences, Kenzie and Gennaro revisit the case that troubled them the most. In their desperate fight to confront the past and find Amanda McCready, Kenzie and Gennaro are forced to question if it's possible to do the wrong thing and still be right or to do the right thing and still be wrong.

Moonlight Mile, the sixth book in the series, is Lehane's first Kenzie/Gennaro book since 1999's Prayers for Rain and a direct sequel to 1998's Gone, Baby, Gone.  Kenzie and Gennaro are now married and have a four-year-old daughter of their own. Angie is retired from the detective game, spending most of her time as a stay-at-home mom, but going to night school to get a degree. They closed their office and Patrick is now bucking for a job at a prestigious Boston investigations firm. They're older, wearier, and tired of seeing good people get screwed.

With it's parallels to Gone, Baby, Gone, it's hard to discuss the book without spoilers, so consider this a spoiler alert.

Amanda's mother was an unfit parent who left the four-year-old alone as she went out to get drunk and do drugs. She left her daughter alone in a car so hot that it left little Amanda with second degree burns over most of her body. Her uncle, Lionel, talked to a detective he knew, and they kidnapped Amanda and sent her to live with a police captain and his wife. Patrick found the girl and, despite his misgivings, returned her to her mother. Amanda was kidnapped to give her a better life, but it was still kidnapping.

In Moonlight Mile, Amanda herself is doing what Patrick could not. This time, she disappeared because she kidnapped the infant daughter of a Russian mobster and his crazy Mexican wife. She did what her Uncle Lionel did: take an innocent child from horrible parents in order to give her a better life. There are some highly charged conversations late in the book between Patrick and Amanda where Patrick explains to her why he did what he did. Lehane hasn't lost the ability to tap into Patrick's heart and show us the suffering he endures by being a heroic knight in a fallen world.

I will say, though, I was disappointed a bit with Angie's role in the story, and I thought the denouement was a little too convenient.  Still, it was nice to spend time with the duo again, and Lehane's descriptive powers of a New England winter are beyond peer.  The whole Kenzie & Gennaro series is well worth your time.
Posted by StephenD at 10:15 AM No comments:

Song of the Week from Help!

Help! was released in August 1965 and doesn't get as much respect as it deserves. Perhaps because it was sandwiched between Beatles for Sale and Rubber Soul, it gets lost. I love Paul's "The Night Before". I love "Tell Me What You See", which comes in second place to this week's winner.

This week's song is the George Harrison composition "I Need You":

Posted by StephenD at 8:02 AM No comments:

Song of the Week from Beatles for Sale

Beatles For Sale was released in December 1964 and shows the beginning of their turn from pop sensation to the deeper, more transformative musicians they would become. It's also, quite possibly, my favorite Beatles album. "No Reply" is near the top of my list of Beatles songs, as is "Baby's in Black" (which the boys wrote in response to the sudden death of Stu Sutcliffe), but they're both too well known for this project. This week's choice comes down to "Every Little Thing She Does" and "What You're Doing".

The winner is "Every Little Thing":