Song of the Week: Zombie Jamboree

Posted by StephenD at 9:38 AM No comments:

"Me? I'd rather have a case of Bass Ale."
"Yea, for truly this is the land of Dairy Queen."
"This is where the fish lives."

I must’ve spent a half an hour sitting there, marveling at the presumption, the sheer arrogance that pervaded every grisly slice. Eventually, though, I rose and left the camp behind, plunging once more into the jungle – this time heading south.

The return of Chris F. Holm's Soul Collector Sam Thornton, last seen in Dead Harvest, is a welcome one.  He may have averted a war, and completely screwed up a large section of New York City, but Sam enters The Wrong Goodbye a marked man.  Like a cosmic game of whack-a-mole, the angels and demons behind the plot have their eye out for Sam; ready to bop him on the head if he shows on their radar. Sam just wants to stay out of sight, but unfortunately for him, fate and an old friend have something else in mind.

Sam's mission is to collect the soul of a particularly nasty piece of work named Varela.  When Sam makes it to Varela's jungle hideout, he finds the man dead and his soul taken.  A rival collector, and old friend of Sam's, named Danny has taken the soul and offers it back to Sam in exchange for help.  The thing is, this is only the first stage of a long plan that could inadvertently bring about the end of the world.  Along for the ride is a Vegas hitman named Gio who had his soul repossessed, but is now inhabiting the body of an overweight food mogul.  (Bonus points for naming him Abe Froman. Yes, he is the Sausage King of Chicago).

With the second Collector novel, Holm both expands and enriches the world he so vividly created in Dead Harvest.  No longer confined to New York, Sam hops from Bogota to Chicago to Los Angeles, with some scenic stops in the American Southwest along the way. We learn more of the rules of the Collection game and about a group of beings called Deliverants.  Sam's first encounter with these nasty buggers is both creepy and memorable (warning: if you're afraid of bugs, this could give you nightmares for days).  Oh, and instead of a giant-ass fight on a helicopter, this book features a car chase on an LA freeway - complete with a body hop right in the middle of it.

Like the Dead Harvest/Red Harvest connection, this book's title is an homage to Raymond Chandler's The Long Goodbye.  Chandler's novel is in part a meditation on the relationship between Marlowe and a drunk named Terry Lennox and the importance Marlowe puts on their friendship. Anyone who's read that novel knows what happens to this friendship.  I can't help but think Sam and Danny's relationship is more than a little inspired by The Long Goodbye, considering Holm chose it as his title inspiration.

The upcoming third book in the series is titled The Big Reap (easy money on being inspired by Chandler's The Big Sleep) and I can't wait for it.

The Collector Series is highly recommended.
Posted by StephenD at 9:29 AM No comments:

Song of the Week: Try

So many good ones here.

"We put our faith in Blast Hardcheese."
"Anybody notice that I'm here now?"
"You still haven't figured it out yet, have you?" "We have. Can we leave?"

Posted by StephenD at 9:16 AM No comments:

Inspired by last week's song, this week is another James Bond theme song.  Goldeneye is probably my favorite Pierce Brosnan Bond movie, but "Tomorrow Never Dies" is my favorite Brosnan Bond song.  This one's been in and out of my head since last Monday.

Posted by StephenD at 9:29 AM No comments:

Email ThisBlogThis!Share to TwitterShare to FacebookShare to Pinterest
Labels: James Bond, music, song of the week

"Goofy suit?"
"Think they'd mind if we all left?"
"Here's a puzzler: who of these two is worse at their art form?"

Song of the Week: Skyfall

Last week, the theme song for the next James Bond movie was released.  Continuing the trend of getting popular artists to do the themes, this movie's song is by Adele.  I have to say, I like it.  I like the opening horns and the strings in the chorus.  Those are very Bondian touches.  Take a listen and see what you think.

Email ThisBlogThis!Share to TwitterShare to FacebookShare to Pinterest
Labels: James Bond, music, song of the week

The Foley guy must really have liked his job during the fight scene at 0:30.
"I understand now, Gallagher is funny."
"I saw the little creature."

My post on humor and politics from waaaaay back is still one of the ones that gets the most hits.  The problems I talked about then still exist and in some ways have gotten worse.  Did you read Krugman's reaction to this Roger Simon story?  What our Nobel laureate friend failed to realize is Simon's piece was satire.

Speaking of satire, here's a clumsy attempt of my own:

To: Romney for President
From: SCD Associates, LLC
Re: Campaign Ideas.

Given the recent kerfuffles surrounding The Candidate, we'd like to offer our services in a rebranding campaign.  We feel "Believe In America" is a nice slogan, but it doesn't help The Candidate connect with voters.  As a side note, in some of our recent polling groups have connected the slogan with the opening scene of The Godfather.

We believe that by employing a little humor, we can defuse not only the recent missteps, but also the image that The Candidate is cold, stuffy, and too "corporate".  Please review the attached proof and let us know what you think.

We look forward to working with you and The Candidate. 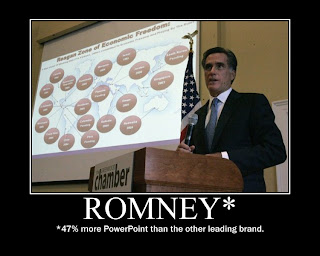 To: Obama for America
From: SCD Associates, LLC
Re: Campaign Ideas.

Hello and thank you for your recent interest in our company.  In response to your question, we don't think "Forward" is a good slogan for The Candidate.  It's not as catchy as "Hope and Change" was, and is much too easily mocked by The Opponent.  Already, we've heard it mischaractarized as "Forewarned" and also the repeated claims that The Candidate wants to take America "Forward" over the "debt cliff".

Given how close we are to Election Day, we don't think there's time for a rebranding effort, so we've taken a look at what you've done so far.  After reviewing The Candidate's speeches as well as those made by former President Bill Clinton, we see a theme developing.  Our advice is to embrace that theme and go all out with it in the remaining weeks.

Please review the attached proof and let us know what you think.

We look forward to working with you and The Candidate. 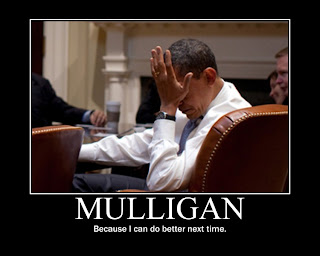 Posted by StephenD at 9:42 AM No comments:

Song of the Week: I've Been Away For Too Long

For the first time since 1996, there's a new Soundgarden album coming out.  I was never a big fan of theirs the first time around, but I became a fan of Chris Cornell after he did the theme to "Casino Royale".  If the rest of King Animal sounds like this (or sounds like Soundgarden circa Superunknown), I'll have to give it a shot.

Here's the new Soundgarden single "Been Away Too Long":

Posted by StephenD at 9:33 AM No comments: