I mentioned in my introduction that we didn’t do a wrap-up of the 2009 leg of our tour. This is a shame because it was one of the most fun and quite possibly my favorite (though that’s presumably like picking your favorite child). I had never been to Chicago before this trip and came away with a great appreciation of the city. It’s one of the places we hit on our tour to which I would like to return. We flew in from our separate airports (he from Dulles, me from Newark), and met at O’Hare around 8:30 on Saturday morning. His flight beat mine by maybe fifteen minutes.

Since our hotel didn’t allow check-ins until after 2pm, we figured we’d start right in with sightseeing. We started with Shedd Aquarium (large and with a wide array of sea life; recommended if you like Aquariums) and the Adler Planetarium (also large and also recommended). It was at this stop that we stumbled across the Chicago City Pass. By buying the City Pass, you got discounted entry into many of the museums, the occasional freebie, and the authority to bypass about half the lines at many of the more popular attractions.

That night we indulged in the main activity people first think of when Chicago is mentioned: shady politics. Just kidding. It was deep dish pizza.

Day Two saw our first baseball game of the trip, which introduced us to the heartburn many White Sox fans felt that year upon hearing the name Bobby Jenks. Dinner was at The Weber Grill (which could introduce heartburn of its own kind to the less gastrointestinally stout than I) and then a quick stroll over to Navy Pier. 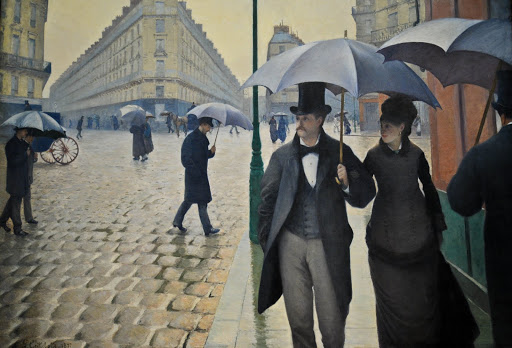 The next morning we visited the Field Museum, then took a brisk walk up Lake Shore Drive to the Art Institute of Chicago. I got to zone out for a bit before Nighthawks (Edward Hopper, FTW!) and admired a work by an artist I was unfamiliar with: Gustave Caillebotte’s Paris Street; Rainy Day (picture on right). They also have a large selection of Impressionists. A must stop for anyone, even if you’re not necessarily an art fan.

What else…two more Sox games, up the Sears Tower (like many locals, I cannot think of it as the Willis Tower), the Museum of Science and Industry, and a visit to Ernest Hemingway’s birthplace – on the 110th anniversary of the author’s birth no less.

After Chicago, we took a quick jog over to Detroit to see the Tigers take on the Seattle Mariners. The day started out gray and dreary, but the sun came out and the temperature rose into the upper 70’s by game time. As we left the park, the clouds came back and it started to rain; essentially, the weather was only nice long enough to get the game in. Meanwhile, back in Chicago, Mark Buehrle pitched a perfect game – missed it by two days!

The whirlwind tour continued back to Chicago for a pair of Cubs games. Wrigley Field tradition has famous Chicago natives throw out the opening pitch and lead the crowd in singing the national anthem. For game one, it was Carlos Bernard (24’s Tony Almeida) and for game two it was Robert Zemeckis (Back to the Future).

Saturday featured our own kind of double-header: a noon game at Wrigley Field and a 7:00pm game in Milwaukee. Unfortunately, there wasn’t a whole lot of time to enjoy Milwaukee because of the late arrival and things being closed on Sundays. We did get some tasty German food, though.

Monday morning was back to Chicago and then flights back home; another leg of the Great American Ballpark Tour was in the books.