In May, Rockstar Games released L.A. Noire* for Playstation3. The game itself is great (and may be a topic of an upcoming post). In conjunction with the release, Rockstar and Mulholland Books got a bunch of crime writers together and released a companion short story collection. 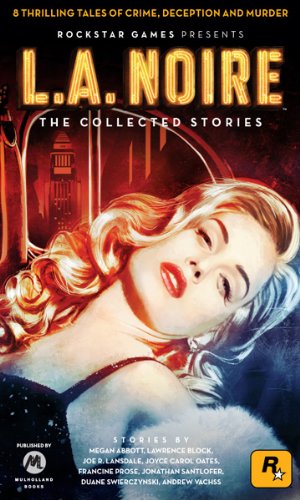 With short story collections by multiple authors, the results have been hit or miss. Generally, the ones I've picked up have been solid throughout. I hate to say it, but the L.A. Noire collection breaks that streak.

Don't get me wrong. There are some fantastic stories in this collection. My favorites are:

"See the Woman" by, Lawrence Block
"Hell of an Affair" by, Duane Swierczynski
"Postwar Boom" by, Andrew Vachss

Joe R. Lansdale's "Naked Angel" was pretty good, too. I liked how he used a couple characters from the game in his story (he was the only one of the authors to do so).

Francine Prose's "School for Murder" wasn't poorly written, but I called the ending on second page of the story.

Overall, not a bad collection, but not one I'd recommend either. I'm glad I downloaded it when the collection was free for one weekend.