Growing up, there were all sorts of good holiday specials on TV.  Especially around Halloween with the Garfield special (one of my favorites) and "It's the Great Pumpkin, Charlie Brown".  But does anyone out there remember this little gem from Disney?

"What a powerful beam he must have! Look at that modulation!"
"I am the lemon zester of destruction."
"I have no powers, but I can skip reasonably well."

I haven't posted any book reviews in a while.  Not because I haven't been reading, but because it took me a while to get through the last book.  I'm not going to mention the book by title, but I'd like to talk about it a bit.

I'd read a short story or two by the author, listened to some of his podcasts, and thought I'd give the book a read.  There was nothing "wrong" with it per se.  The writing was fine.  The plot wasn't overly cliched.  When I sat down to read it, I could tear through 40-50 pages in no time flat.  But I rarely wanted to sit down and read.  It just didn't grab me.

The hero is tasked by his agency to clean up a crime scene; removing all evidence they were ever there.  Roughly 60 pages later "someone" comes after our hero - the first time he's actually in danger himself.  The blurbs promised lots of spy action, but he spends the majority of his time hopping trains and cabs trying to shake a tail that may or may not be there.  The main villain of the story is unmasked 50 pages from the end, and the motivation for his actions seem a bit far-fetched.

Like I said, the writing was fine.  There weren't any clunky sentences or bad grammar.  But there wasn't anything particularly memorable either.  The spycraft was accurate, but in thrillers, the writer needs to take some liberties to make things more exciting.

There are just too many good books out there to read, so I probably won't be reading another from this author.  Hopefully my next book will be a more satisfying read.
Posted by StephenD at 9:39 AM No comments:

Email ThisBlogThis!Share to TwitterShare to FacebookShare to Pinterest
Labels: books

"Dustbuster Galactica."
"I have a past that I'm not proud of." "That's why I keep a scrapbook."

Another week, another solid episode.  This week, Hank and Britt get involved with an amnesiac college student and a missing person case.

The boys show up at their diner for breakfast and it turns out a kid freaked out and has locked himself in the restroom.  They make a deal with the owner:  if they can get the kid out, they get free breakfast for a week.  Turns out, the kid can't remember who he is or where he is.  Hank and Britt takes him to the police station and the kid freaks out and disappears after seeing a poster about a missing college student.
Of course, Hank starts to investigate the missing student in hopes that it will shed some light on who the kid is and what happened to him.

On our serialized end, nothing more on the Montague story, but we see more of Steph slipping away.  By the end of the episode, she decides to have Hank commit her to an assisted living facility.  Just like last week, our standalone provides a parallel story to this.  In the final confrontation with our amnesiac, the kid blubbers on and on about how he can't believe he did something wrong and that's not him and he shouldn't be allowed to live anymore.  Hank tells the kid to suck it up because there are folks out there with bigger problems that will never get fixed and they have to live one day at a time.

Some more fun moments.  Early on, Britt is worried that Katie will find the engagement ring he has stashed in her place.  He thinks Katie can sense its presence.  Hank makes a "Tell-tale Heart" reference about this.  And another one at the end where our heroes bicker about who in the partnership is Batman and who is Robin (Britt:  "I'm no sidekick.")
Posted by StephenD at 9:15 AM No comments:

"Hey! What kind of robot gets dizzy?"

Posted by StephenD at 9:28 AM No comments: 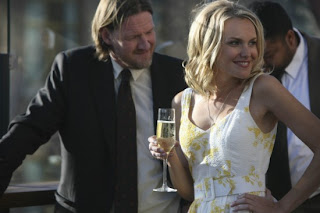 Seriously. Why aren't you watching this show?  It just keeps getting better with each week.

Like I guessed from the previews, this was mostly a standalone episode.  No mention of Montague storyline, but we got the recurring elements of Hank's ex-wife (Gretchen)'s upcoming second marriage and the Britt/Katie relationship.

Hank and Britt are introduced by their lawyer Maggie to their clients this week.  A man whose wife is dieing from cancer who needs them to track down a ring that is a family heirloom.  Of course, things aren't as straightforward as they seem.

There's the standard humor this show displays. Hank's sister makes some funny comments at Gretchen's engagement party.  When Britt and Hank meet their lawyer (who gave birth two episodes ago), Britt can't stop staring at her breasts and actually says, "Your boobs are huge."  To which Maggie replies, "Stop staring at my son's lunch."

Then the show breaks your heart.  Hank is still coming to terms with Gretchen's new marriage, and everything keeps reminding him of the fact that he's about to lose her forever.  Britt is thinking of getting serious with Katie.  Their clients are keeping secrets from each other and the wife will probably file for divorce so her husband doesn't screw up their son's inheritance.

Katie makes a stupid, drunken mistake that could seriously damage her relationship with Britt.  She goes to Hank for advice and he tells her to lie her ass off.  It's a sign that you really care about these characters when you want to scream at the TV and say lying is a really, really bad idea.  You just know their lie to Britt is going to bite them later on.

This week had a tight story and great acting by all involved.  It is one of the best shows on TV right now.  If you're not watching it, you're dead to me.

Seriously.
Posted by StephenD at 9:31 AM No comments:

The Greatest Game Ever Played Fifty years ago today,Bill Mazeroski hit the only bottom of the ninth, Game 7, World Series clinching home run in baseball history.  Back in those days, they actually played World Series games in the afternoon instead of at 9:00 at night.  Every year, Pittsburghers and baseball fans country wide travel to the spot in Oakland (a section of Pittsburgh) where Forbes Field once stood and listen to the radio replay of the game.

ESPN has a good writeup of the game and the two teams involved (Pirates and Yankees).  And the Pittsburgh Post-Gazette has a good deal of special coverage.

Here's a video of the home run. A full copy of the game was recently found in the archives of Bing Crosby. Boy, would I like to see that.


(Baseball historians will note the timestamp on this blog post).
Posted by StephenD at 3:37 PM No comments:

Posted by StephenD at 9:11 AM No comments: 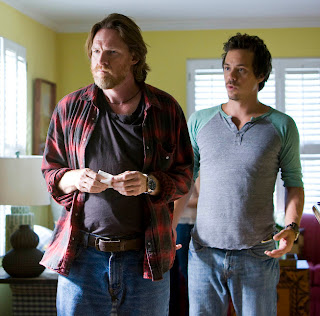 Are you watching F/X’s “Terriers”? If not, then double shame on you. It’s one of the best new shows of the fall.

Last night’s episode, “Manifest Destiny”, continues a strong string of episodes dealing with the Lindus arc which began in the pilot. After springing client/nemesis Robert Lindus from jail last week and subsequently getting him killed (accidently, of course), our heroes, Hank Dolworth and Britt Pollack, are once again neck deep in the muck. Turns out Lindus was carrying around a soil report that showed his construction site is contaminated with a whole heapload of carcinogens. Lindus’s backers, including a lawyer named Zeitland, approach Hank to say they don’t care where Lindus is, they just want the soil report back. Hank and Britt put the report in Lindus’s pocket and leave the body where it would obviously be found. The report is found. The building project is stopped. All is right in the world.

Or is it? Hank’s sister Steph says the soil report was faked. That Zeitland and the Montague crew were probably dumping hazardous materials onsite to goose the report.

Judging by next week’s previews, it looks like we’re going to get a standalone ep or two before returning to the Lindus/Montague storyline. And that’s fine.

I’m curious as to what the Montague endgame is. It looks like they may have wanted the report to get out and their project shut down. But for what reason? A scam to pocket money from the government for environmental cleanup? (if the numbers are too high, they’ll probably get some sort of Superfund cash) Did Zeitland find something more valuable underground and wanted his partners to back out? I even had the idea that it could be some sort of crazy Max Bialystock-style scam where they sold more shares for the building project than were available and want to cash out before the project is complete and abscond with the dough.

Whatever it is, I’m hooked.
Posted by StephenD at 9:30 AM No comments:

A little changeup this week. Since I have a bit of Star Trek on the brain, here's the boys from RiffTrax doing Generations. In case you're unfamiliar with RiffTrax, it's an audio-only offshoot of MST3K by Mike Nelson, Kevin Murphy, and Bill Corbett.

"...how excited we all are to have a group of living legends with us for our maiden voyage." "Except for Chekov."
"Why do I take these cheesy roles? I'm a better actor than this!"

Posted by StephenD at 9:05 AM No comments: