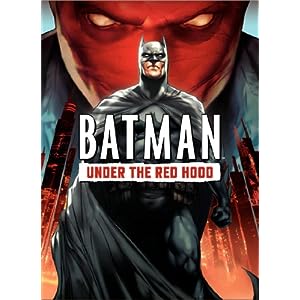 I got the chance to see the latest DC Animated Universe release Batman:  Under the Red Hood last night.  It was one of the best entries in the series.  I loved the first couple, but the last two or three releases I haven’t been too keen on.

Red Hood retells the story of the death and return of the second Robin, Jason Todd.  Anyone familiar with the comic knows the story.  I haven’t read much of the Batman series, but I picked up most of the story here and there.  Especially with the whole “Battle for the Cowl” series last year.

Bruce Greenwood (Thirteen Days, Star Trek) does a good job as Batman.  Any animated Joker will always be compared to Mark Hamill, but John DiMaggio (Futurama’s Bender) has a different take.  I wasn’t blown away by his performance, but he did have the laugh down.

The animation was great.  The story is top-notch.  Lots of great little scenes and some real character development.  The two emotional lynch-pins of the story are how Jason’s death affected Batman and Jason struggling to convince Batman his moral code has caused more suffering than good by letting people like the Joker live.

Can’t recommend this one highly enough.
Posted by StephenD at 11:46 AM No comments:

Jack Foley is looking at 30 years for his exploits from Out of Sight. In prison, he becomes friends with Cundo Rey, who introduces him to a hot-shot lawyer. Said lawyer gets Foley off with not much more than time served. Cundo lets Foley stay at one of his houses until Cundo’s release, provided Foley keeps an eye on Cundo’s common law wife Dawn Navarro. Foley can’t help feel that a larger hook is attached to Cundo’s generosity.

I’ll start right off the bat and say I was disappointed in Road Dogs. I read it before I read The Dawn Patrol and have only gotten around to writing about it now (a month later). Elmore Leonard is one of the great American writers without a doubt. His books are known more for their cool characters and snappy dialogue than their tight plotting, and that’s OK. But some of his books could use a bit more plotting.

Road Dogs has all the elements of a great book. Jack Foley is back in action. Cundo Rey is back from the dead. Even is-she-or-isn’t-she psychic Dawn Navarro is back. Foley thinks Cundo wants him to rob a bank to repay his kindness. He’s also pursued by an obsessed FBI man who is adamant about catching Foley in the act and sending him to jail for the 200 banks he’s robbed. Lots of tension. Lots of irons in the fire. The first 50-70 pages are classic EL. Then….I felt the book lost some steam. Foley sleeps with Dawn and is recruited into one of her scams. Is Cundo pissed that Foley slept with her? Not as much as you’d think.

It was hard to get a read on Cundo. I was never sure if he expected something of Foley or if he was just helping out a friend. After his prison release, the book turns into The Dawn Show. She turns to Cundo’s friends to try to scam him out of his money and his houses. Why did she wait all the time Cundo was in prison? Why now?

There are some fun moments with Lou Adams (the FBI man hounding Foley), but I felt his storyline never went anywhere.

I’m still a fan of Elmore’s, but I’d take Swag or City Primeval any day of the week over Road Dogs.
Posted by StephenD at 11:50 AM No comments:

"In the future can we make it a law that films have to be made by filmmakers?"
"It's the '80's, do a lot of coke and vote for Ronald Reagan."

Posted by StephenD at 9:29 AM No comments:

I went to a picnic at my friend's yesterday.  And for the first time in I don't know how many years, we played catch.

That's something you lose when you be come an adult.  Unless you have kids and you are teaching them how to play, when's the last time you grabbed your glove and just went out there?

I tossed for a bit with my buddy, then he jumped in the pool.  Another guy at the picnic grabbed my friend's glove and we played catch for a while.  Never met the guy before that day.  We just tossed the ball back and forth and swapped stories about going to ballgames and how we knew the host.

If it's a nice day where you are, call up a friend, grab your mitt and head to the nearest grassy spot.  Play some catch.  You won't regret it.
Posted by StephenD at 5:43 PM No comments:

Posted by StephenD at 9:19 AM No comments:

"And leaves nothing behind but the great smell of Brut."

The Dawn Patrol, by Don Winslow 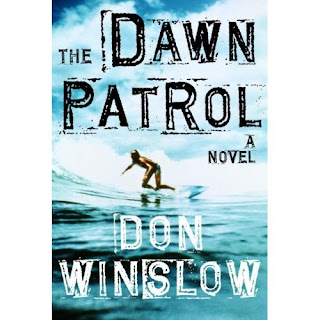 Boone Daniels would like nothing better than just to surf for the rest of his life.  Like everyone else he needs cash, so he works (as little as possible) as a PI.  He's hired by a San Diego law firm to search for a missing witness in an arson investigation.  He takes the case reluctantly because it comes on the eve of the biggest set of waves to hit the California shores in a generation.  Naturally, the case turns out to be more complicated than initially thought, and Boone gets dragged into a web of strip clubs, drug dealers, and human trafficers.

Why didn't I read this book sooner?  Boone and his surfing buddies "The Dawn Patrol" are all fascinating characters who I want to spend more time with.  Don Winslow created a fun world with tons of San Diego history and told it with a voice that most writers would kill for.  It hits most of the well-worn points of a PI novel, but the characters and voice are so great, it feels fresh and new.

I finished the novel in three days.  It grabbed me like a strong undertow, sucked me under the waves, and battered me against a submerged reef.  Go and read this book, stat.

In DR. STRANGELOVE OR: HOW I LEARNED TO STOP WORRYING AND LOVE THE BOMB, the U.S. President must contend with the Russians - and his own military and political leaders - when a fanatical general launches a nuclear strike on the U.S.S.R. Sellers memorably plays the president, a British captain, and a mad inventor.

This calendar has had a good string of movies starting with Road to Utopia on Saturday, followed by 1776, Awakenings, and now Dr. Strangelove.  The blackest of black comedies, director Stanley Kubrick - who cowrote the screenplay with Terry Southern - effectively captures the paranoia of the early Cold War while poking fun at the theory of MAD (Mutually Assured Destruction).  This is without a doubt, another must see.

Posted by StephenD at 9:23 AM No comments:

One of the more radical ideas in human history was put into motion 234 years ago today. In the Declaration (and enunciated more clearly in the U.S. Constitution), that America, the last, best hope of mankind is a people that have a government, not a government that has a people. Something too many people and far too many politicians have lost sight of these days.

Happy Fourth to all!

When in the Course of human events, it becomes necessary for one people to dissolve the political bands which have connected them with another, and to assume among the powers of the earth, the separate and equal station to which the Laws of Nature and of Nature's God entitle them, a decent respect to the opinions of mankind requires that they should declare the causes which impel them to the separation.

We hold these truths to be self-evident, that all men are created equal, that they are endowed by their Creator with certain unalienable Rights, that among these are Life, Liberty and the pursuit of Happiness.--That to secure these rights, Governments are instituted among Men, deriving their just powers from the consent of the governed, --That whenever any Form of Government becomes destructive of these ends, it is the Right of the People to alter or to abolish it, and to institute new Government, laying its foundation on such principles and organizing its powers in such form, as to them shall seem most likely to effect their Safety and Happiness. Prudence, indeed, will dictate that Governments long established should not be changed for light and transient causes; and accordingly all experience hath shewn, that mankind are more disposed to suffer, while evils are sufferable, than to right themselves by abolishing the forms to which they are accustomed. But when a long train of abuses and usurpations, pursuing invariably the same Object evinces a design to reduce them under absolute Despotism, it is their right, it is their duty, to throw off such Government, and to provide new Guards for their future security.--Such has been the patient sufferance of these Colonies; and such is now the necessity which constrains them to alter their former Systems of Government. The history of the present King of Great Britain is a history of repeated injuries and usurpations, all having in direct object the establishment of an absolute Tyranny over these States. To prove this, let Facts be submitted to a candid world. [...]

(continue reading)
Posted by StephenD at 10:52 AM No comments:

Posted by StephenD at 9:39 AM No comments: