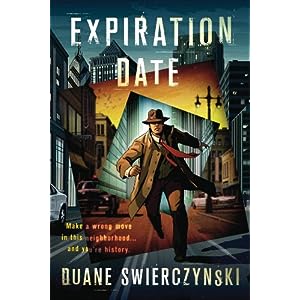 Mickey Wade, recently downsized newspaper reporter, is at the end of his rope.  He's given up his nice apartment and moved into his grandfather's one-room flop in a bad part of town.  He takes two Tylenol he finds in his grandfather's medicine cabinet and wakes up in 1972.

Duane Swierczynski is one of the most entertaining writers around.  His books are always fun, quick reads with interesting concepts, and this one is no different.  I'd read Swierczy's other works (The Blonde, The Wheelman, even his work on Cable) and was eagerly anticipating this one.

One of the complaints I've had about his other books is their abrupt endings.  The Wheelman especially, because The Blonde was improved with the novella The Redhead included in the paperback edition.  Not so with Expiration Date. The ending is near perfect.

Like I said, it was a quick read.  I finished it in two days.  It gets my recommendation.

BONUS:  For eagle-eyed fans of Swierczynski, pay attention to the scenes with Mickey Wade in the sanitarium.  There are some allusions to Swierczynski's first book Secret Dead Men (which I read for the first time in January).  That certainly brought a smile to my face.
Posted by StephenD at 11:23 AM