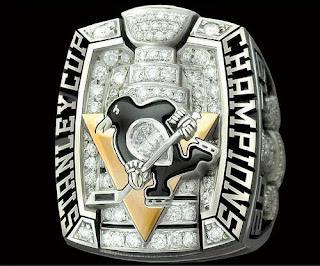 The Penguins got their Cup rings last night.
Posted by StephenD at 1:16 PM No comments:

Joe Thornton is a lousy ventriloquist...

...but a great hockey player.

At the City's Edge by Marcus Sakey

Jason Palmer, recently discharged from the Army, returns to his native Chicago as a man in search of himself. He spends most of his time running, drinking, and sleeping around. When his brother, Michael, is murdered, Jason takes it upon himself to find the killers and look after Michael’s 8-year-old son. As you can expect, Jason finds himself pulled into a world of gang warfare, political corruption, and corporate greed.

After reading his first book, I became a big fan of Marcus Sakey. The quality of his writing is present in his second novel, but I can’t help but feel a little bit of a letdown. The plot hums along just fine and there are a fair number of twists and big reveals. For the most part, the characters are mainly stock characters and never rise above that. Disgruntled army vet? Check. Sexy ethnic love interest? Check. Crooked cops? Check. Wire-inspired gangbangers? Check. In The Blade Itself, the characters started off as recognizable types, but Sakey was able to breathe extra life into them and make them real people. Of course, he does a phenomenal job painting a portrait of the city of Chicago. Maybe since I visited there this year, the locales really jumped off the page.

Still, in the hands of a capable author like him, Sakey’s prose tends to downplay some of the negatives. Not as good as his debut, but an entertaining read nonetheless.
Posted by StephenD at 10:19 AM No comments:

Hollywood locations manager Bob Lonski has seen something he shouldn’t have while working in Chicago. His studio hires PI Ray Dudgeon to protect him. Dudgeon, like all good private investigators, starts to dig and finds himself in the middle of an internal mafia power struggle.

This debut novel from Sean Chercover has won well-deserved praise from many circles. Chercover does a good job of respecting the PI genre while giving us something fresh. The story is entertaining, the prose is clean, and the characters believable. I do have my quibbles with the book. There are occasions where Chercover dives too deep some details that the reader probably doesn’t care about (two pages on how Dudgeon’s apartment is decorated; a page and a half on Dudgeon waking up in Washington, D.C., eating lunch, then driving back to Chicago). Though there are scenes that are nearly flawless: the car/pool and when Dudgeon is interrogated.

The debut novelists of 2007 really hit it out of the park. Chercover, Marcus Sakey (The Blade Itself), and Dave White (When One Man Dies) all had their debuts published that year. While I like Big City, Bad Blood and it was deserving of all the awards it won, my votes would’ve gone to The Blade Itself. There’s something meaty about Sakey’s writing that give it an edge.

Big City, Bad Blood comes recommended.
Posted by StephenD at 9:39 AM No comments: