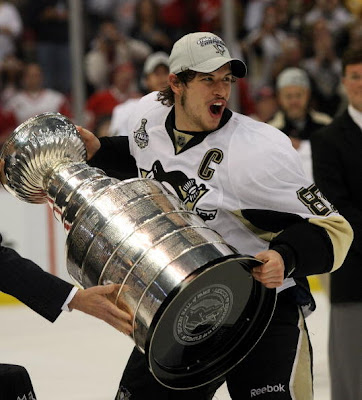 Max Talbot scored two second-period goals, and the Pittsburgh Penguins overcame the loss of captain Sidney Crosby and a whole lot of history to beat the defending champion Detroit Red Wings 2-1 on Friday night in Game 7 and win the Stanley Cup for the third time.

The home team is generally favored in Game 7s. The last time a road team won a Game 7 for any major championship was the Pittsburgh Pirates over Baltimore in 1979.

In terms of upsets, it wasn't "The Miracle On Ice," but you know the Wings are going to be kicking themselves for quite some time. And I'm not trying to take away from the Penguins, I'm just saying that the Wings didn't rise to the occasion the way that they did.

I don't really want to be one of those fans, but it did make me happy to see Hossa sitting there without The Cup. :)

Hey, Hossa isn't a jerk as athletes go and it really would've been nice for Detroit (and the whole damn state) to hoist the cup, but...

Everyone seems to like Hossa as a teammate. And he's an all-world talent. Like I've said, I respect his decision to go for a 1 year deal to win the Cup (turning down more years and $$$ from Pittsburgh), but he just bet on the wrong horse.