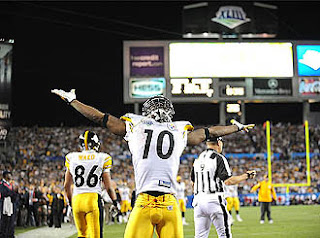 In one of the greatest Super Bowl games I've seen, the Pittsburgh Steelers became the first team to capture 6 Lombardi Trophies as they defeated the Arizona Cardinals 27-23.

Pittsburgh stormed out to an early 10-0 lead and James Harrison returned an interception 100 yards for a touchdown - the longest play ever in Super Bowl History - to put the Steelers up 17-7 at halftime. Arizona clawed their way back into it thanks in part to some very cautious defense by the normally aggressive Steelers and the big play ability of Cardinals WR Larry Fitzgerald.

As a Steelers fan, I got nervous when Fitgerald scored to put the Cards ahead 23-20, but there were more than two and a half minutes left on the clock. But I didn’t panic. I knew the stat NBC was about to show. In his brief career, Steelers quarterback Ben Roethlisberger has staged seventeen come from behind victories in the fourth quarter. After last night, it’s now eighteen.

Roethlisberger and Super Bowl MVP Santonio Holmes combined for 75 of the 78 yards needed for the game winning drive. Holmes made an acrobatic grab in the end zone with 48 seconds left to put the Steelers up 27-23. And the number one defense in the league was able to hold the lead and forced Cards quarterback Kurt Warner to fumble the ball with 4 seconds left – sealing the victory for Pittsburgh.

Pittsburgh coach Mike Tomlin became the youngest coach ever to win a Super Bowl. In summarizing the game he said, "Steeler football is 60 minutes. It's never going to be pretty. Throw style points out the window, but these guys will fight to the end. We didn't blink."

Articles from the Pittsburgh Post-Gazette:
Recap
Lords of the Rings
MVP Holmes
Big Ben and the drive
Gameday Picture Gallery
Posted by StephenD at 9:14 AM